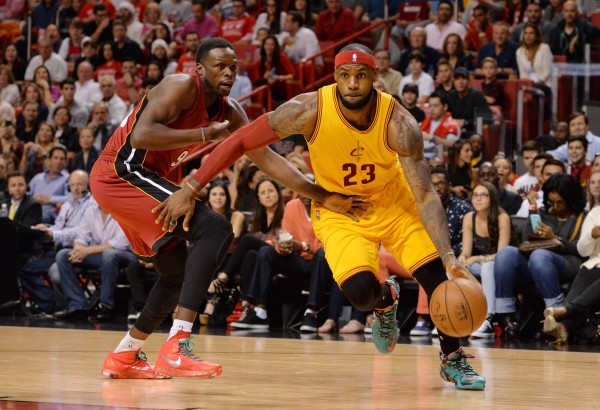 (Cleveland, OH) – In their final home game before the All-Star break, the Cleveland Cavaliers (32-21) will take on the Miami Heat (22-29) on Wednesday night at Quicken Loans Arena, which is scheduled to tip off shortly after 8:00 pm ET and will be broadcast nationally on ESPN. The Cavs, who have won 13 of their last 14 games, will look to keep their momentum going.

“We’re a different team than we were then,” said Cleveland Cavaliers head coach David Blatt about the team’s previous game in Miami on Christmas Day. “So the preparation is somewhat different, but tomorrow’s a big game for us like they all are right now and we’re preparing seriously.”

The Heat will also be a different team than the one the Cavs faced in late December, as All-Star shooting guard Dwyane Wade will miss Wednesday’s game and the All-Star game due to a lingering hamstring injury that has caused him to miss the last two weeks of games.

“The Heat fans deserve for me to get on the court with the Heat first than be out seven games and then play in the All-Star Game,” Wade said after Tuesday’s practice in Miami. “I wasn’t going to play much either way it goes. The smartest thing to do will be to use this All-Star break and strengthen myself a little more for the second-half push.”

Although Wade will be inactive, power forward Chris Bosh garners attention as the Heat’s priority threat on offense. Bosh, who leads the Heat in scoring with 21.2 points per game this season, is fresh off a 32-point performance in Miami’s 109-95 victory over the dismal New York Knicks on Monday.

Since his insertion into the starting lineup, Heat center Hassan Whiteside has been an absolute monster for his team since January 3rd. In that span up until now, Whiteside has averaged 13.7 points, 11 rebounds and 3.3 blocks per game.

In order to slow down Whiteside on Wednesday night, Timofey Mozgov and Tristan Thompson will need to play an extremely physical game in the post and keep the Heat from scoring second-chance points.

“He’s become a real factor in their team. He’s done some amazing things for them and I think everyone recognizes that,” said coach Blatt on the emergence of Whiteside. “That does, to a certain extent, force us to prepare for them differently in terms of individual match-ups.”

Outside of his amazing offensive play lately, Kyrie Irving has continued to play great defense and limit the production of opposing guards. In Wade’s absence, Miami guards Mario Chalmers and Norris Cole have seen an increase in their minutes and role importance. Although they are not elite guards by any stretch, Chalmers and Cole are both threats to score points.

Despite coming off a double-double effort of 32 points and 10 rebounds in Sunday’s 120-105 win over the Los Angeles Lakers, Kevin Love has struggled with offensive consistency throughout the season. On Saturday night, LeBron James caused a stir on social media when he tweeted something that was immediately thought to be directed at Love.

Stop trying to find a way to FIT-OUT and just FIT-IN. Be apart of something special! Just my thoughts

After the victory over the Lakers on Sunday, James was asked about the tweet with a large group setting of media present and cameras rolling. He initially denied the tweet had anything to do with Love or the Cavs team.

However, once the cameras were shut off and most of the group dispersed elsewhere, ESPN’s Dave McMenamin approached James directly. After he read LeBron’s tweet on Saturday night, McMenamin recalled a quote that Love had said to him back in October during the preseason.

“I’m comfortable and just not trying to, I guess, fit in so much,” Love said. “I had a talk with the guys on the plane ride over [to Brazil] and also at different practices off the floor and they told me to fit out, just be myself.”

After James was shown the quote on McMenamin’s phone, James allegedly looked him in the eyes, smiled and told the small group of reporters that it’s not a coincidence that he was talking about Love in the tweet.

After McMenamin broke the news to ESPN about the “fit in” tweet, James took to Twitter on Monday morning and clarified his side of the story in defense of his teammate.

I like u guys a lot(Media) but don’t try and make a story cause it looks good. If I have a problem with a teammate or anyone I’ll say to….

their face and not over social media. That’s corny and wack! So good try again my friends(Media), I still love you guys.

In an interview after the Cavs’ practice on Tuesday, Love said he was caught off guard when he found out about James’ tweets.

“I talk to LeBron every day. He said if he had a problem with me or any of the coaches or training staff, he’d go right to them. Initially, I was confused. I don’t feel bad. You guys can write what you want to write. There’s no problem with us. I’m going to keep saying that I’m trying to help this team. That’s all that matters. I don’t need any validation.”

Regardless of whatever stance people take on this issue or the degree that reporters have allegedly distorted the truth about James’ relationship with Love, this rift with the media simply cannot afford to become a distraction on the court for the Cavs. With a tough stretch of games following the All-Star break, Cleveland must stay focused in order to continue their stellar play and rise in the Eastern Conference standings.