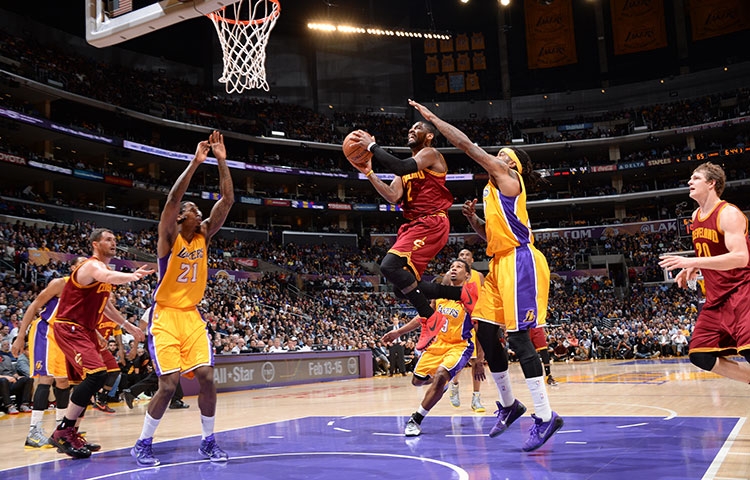 (Cleveland, OH) – Back home at Quicken Loans Arena after their 12-game winning streak came to an end, the Cleveland Cavaliers host one of the league’s most iconic teams that’s a mere shell of its former self, the Los Angeles Lakers.

This matchup marks the first game back in Cleveland for Los Angeles Head Coach Byron Scott since he was fired after three seasons with the Cavs after the 2012-13 season. In those three seasons, Scott had the unenviable task of rebuilding a team that had lost LeBron James to free agency, leading to an overall record of 64-166.

The current Cavaliers saw their dozen’s worth of consecutive victories wiped out in a 103-99 loss to the Indiana Pacers on Friday night. In that game, Cleveland held a 67-54 lead midway through the third quarter, then allowed it to slip away.

Meanwhile, at 13-37, the Lakers currently have the fourth-worst record in the NBA and second worst in the powerful Western Conference. Over the past month, that slide has picked up speed, with the team dropping 12 of its last 14 contests, including a 103-97 overtime defeat to the Orlando Magic on Friday night.

The visitors will be without its leading scorer, future Hall of Famer Kobe Bryant, who is out for the year after shoulder surgery that could possibly end his career. In addition, center Jordan Hill will miss the game due to a hip injury.

Regardless of the lineup offered, the Lakers have offered little resistance against other teams, with the team allowing the second-most points in the league at 106 per game.

Ironically, the 12-game win streak for the Cavaliers began with a 109-102 victory on January 15 in the Staples Center against this same Los Angeles squad. In that clash, James scored 36 points, hitting the clinching basket with 20.9 seconds to go.

The buildup to that game stands in stark contrast to Sunday’s contest, since rumors of Cavs Head Coach David Blatt losing control of the team were rampant after the team had dropped nine of the previous 10 games.

All but two of those losses came without James in the lineup due to injury, a situation that may again occur on Sunday. That’s because in Friday’s game, James reinjured his wrist after being the recipient of a flagrant foul from the Pacers’ Roy Hibbert. He also asked out of the game in the closing seconds, favoring an injured ankle.

After his earlier wrist injury, James missed the following night’s game against the Portland Trail Blazers, but was back in the lineup two nights later.

After Friday’s game, James said, “It’s going to hurt a lot worse tomorrow. It’s the same thing. I already know and I’m not looking forward to it. I’m going to start my treatment and just try to stay on it so hopefully I can go on Sunday.”

The good thing for Cleveland is if James has to miss a game, this contest would be one that shouldn’t cause too many issues. That being said, the Cavaliers have had inexplicable problems with some weaker team by playing to their level, resulting in some embarrassing losses.

Another cause for concern are the continuing struggles of power forward Kevin Love, who managed to score only five points against Indiana. That was the second time in five days that he tallied his season-low in scoring, shooting two for eight in the second half.

After Friday’s game, Love expressed frustration with his inconsistency, saying, “I think it’s one of the toughest situations I’ve had to deal with, but at the end of the day, we’re winning basketball games.”

One thing the Cavs definitely want to avoid is a repeat of the Lakers’ last visit to Quicken Loans Arena. One year ago this past Thursday (February 5), Cleveland was humiliated in a 119-108 loss in which the Los Angeles had just eight players dressed, lost three more to injury during the game and had a player foul out with 3:32 left. After one half, the Lakers led 70-49.

The likelihood of starting another win streak is high here, with this contest being the first of three remaining games before the All-Star break begins next weekend.