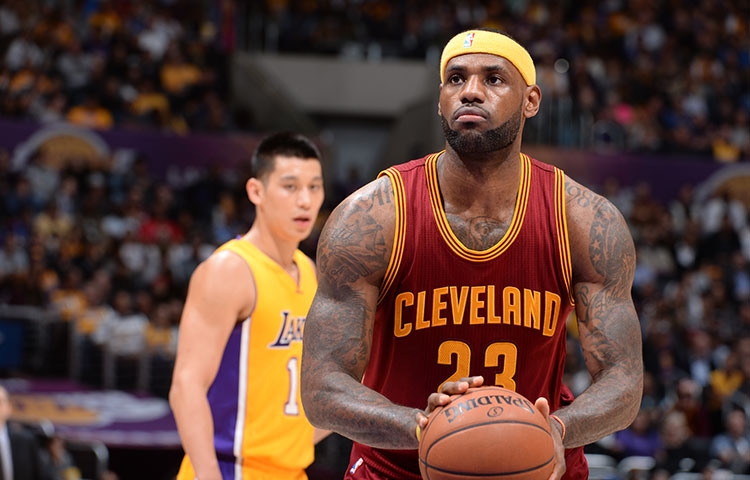 (Los Angeles, CA) – After a six-game losing streak that dated back to January 4th, the Cleveland Cavaliers bounced back to end that streak in their exciting 109-102 victory over the Los Angeles Lakers on Thursday night at Staples Center.

LeBron James was magnificent for the Cavs, scoring 36 points to go along with five rebounds and five assists in a great team victory. For the Lakers, legendary shooting guard Kobe Bryant had a career-high 17 assists to go along with his 19 points on the night. Both legends competed hard against each other as always, but James and Bryant seemed to be have a lot of fun on the court tonight.

“It’s two of the ultimate competitors in this game and we love going against one another,” said James on playing against Bryant over the years. “He’s someone I’ve always looked up to and someone I admire. It’s always great competition going against him.”

According to Bryant, who is now 36-years old, the times have definitely changed over the years as he is now 6-14 in 20 career games against James. After a missed alley-oop dunk by James, Bryant and James could not help but joke around about it on the court.

“This is different for me man, cause I’m used to being hated. You go up against someone now and they give you a hug,” said Bryant to reporters after the game. “It’s a little different now. Some years ago we were competing for championships, I was a lot more moody.”

Even though he had an awful game in Phoenix on Tuesday night, Kyrie Irving stepped up and redeemed himself against the Lakers. Irving showed off some nifty moves to make defenders look silly en route to 22 points on nine of 16 from the field. Despite signs of re-aggravated back issues near the end of the game, Kevin Love played through the pain and scored 17 points and grabbed seven rebounds in 37 minutes. With 7:24 remaining in the fourth quarter, Love showed his toughness and drew a hard charge for his team from Lakers point guard Jeremy Lin.

J.R. Smith was huge in a fast start for the Cavs in the first quarter, draining three shots from behind the arc en route to his 14 total points. In a back-and-forth game throughout the night, the Cavs found themselves down by as many as eight points in the second quarter but quickly gained ground to trail the Lakers just 61-57 at halftime.

“We’re not out of the mud yet,” said Cleveland Cavaliers head coach David Blatt on his team being able to rally and finish a game strong. “But we’re gonna be.”

For the Lakers, center Jordan Hill was extremely efficient from the field, scoring 20 points (10 of 14 shooting) to go along with six rebounds, three steals and one block. Nick Young, also known as “Swaggy P” added 14 points for the Lakers but continued his recent struggles from the floor.

On the final game of their West Coast road trip, the Cavaliers (20-20) will stay put in Los Angeles to take on the Clippers (26-13) at Staples Center. The game is scheduled to tip off shortly after 10:30 pm ET and will be broadcast nationally on ESPN.