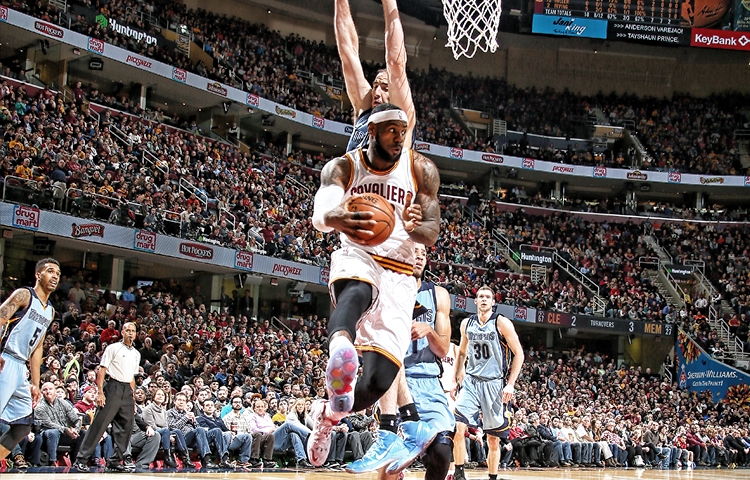 (Cleveland, OH) – Leading from start to finish, the Cleveland Cavaliers won their second straight contest, notching a 105-91 victory over the Memphis Grizzlies in Sunday afternoon action at Quicken Loans Arena.

LeBron James and Kyrie Irving ended the game with double-doubles, while Dion Waiters scored 13 of his 21 points to help put the game away. James tallied 25 points and handed out 11 assists, while Irving threw in 17 and contributed 12 assists.

Anderson Varejao and Shawn Marion also finished in double figures for Cleveland, which improved to 16-10 on the year, with 18 and 11 respectively.

A major contributor to the win was the Cavaliers’ 61 percent shooting on their 46 field goals, a number that was aided by the team’s 34 assists.

James indicated in postgame comments that the assists were a key to the victory, saying simply,

“We shared the ball, that’s a good ingredient.”

When asked about James’ assist numbers so far this season, Cleveland Head Coach David Blatt said, “I think LeBron has established himself as a great facilitator.”

“I thought we came out well defensively, which set the tone for the game. He added about the production from the bench, “I thought our rotation did much better than it’s done in the past few games.”

Southwest Division-leading Memphis, which entered the game with a 21-5 record, was without the services of forward Zach Randolph, who sat out the game with a swollen knee. The Cavs, on the other hand, were able to start veteran Mike Miller, who was questionable in the hours leading up to the contest.

Blatt discounted any advantage Cleveland might have gotten from Randolph’s absence, saying,

“Atlanta came in here the other night missing their starting point guard and beat the hell out of us.”

In the first two-thirds of the opening quarter, the Cavaliers were in total control. During the final one-third, it was the Grizzlies who dominated, coming close to ending the first 12 minutes in a deadlock.

The Cavs scored the first five points of the game, and after Memphis’ Marc Gasol scored on a reverse layup to make it 7-4 in favor of Cleveland, the Cavaliers put together a 13-2 run. That push began and ended on layups from Varejao for a 20-6 advantage.

The last basket in that surge came at the 4:23 mark, at which point the Grizzlies went on a 13-2 run of their own to close the quarter. The first nine points came from a pair of Ohio State products in Kosta Koufos and Mike Conley that made the score 22-15.

In the closing 30 seconds of the quarter, Nick Calathes hit a running hook shot then connected on a three. However, the latter basket was disallowed after checking the replay since it came just after the horn sounded, which allowed the Cavs to maintain their three-point lead.

After each team matched scoring opportunities in the opening minutes of the second, Cleveland ran off eight of the next 10 points to take a 34-25 lead with 6:46 to go before intermission. All eight points came via drives to the basket on layups.

Memphis got it down to five on two occasions, but once again, the Cavaliers ran off eight of the next 10 points, capped by a Waiters layup with 2:48 left before the break that made it 44-33.

A Courtney Lee basket sliced two points off the Grizzlies’ deficit, but James answered with a three and a thundering dunk to give the Cavs their biggest lead of the half at 49-35 with 1:11 remaining.

A three by Memphis with 14.5 to go put the margin at 10, but James was fouled just before the buzzer sounded and split a pair of charity tosses to give the Cavs a 52-41 halftime lead.

In those first two quarters, James was already on the verge of another double-double with nine points and nine assists, while Varejao and Irving combined for 23 points.

When both teams returned to the court, Cleveland was able to maintain a double-digit lead for much of the first five minutes. A 9-2 Grizzlies’ run made it 67-62 Cavaliers with 4:08 to go.

Memphis would get no closer than four for the remainder of the stanza, with Marion closing out the scoring on a three from the right corner off a dish from Matthew Dellavedova. That made it 77-70 entering the final quarter.

In the opening minute of action to start the fourth, Memphis twice was within five, but four straight Cavalier baskets got the margin back into double digits with 9:39 left.

Fueling the run was Waiters, who scored 13 points in the final quarter. All but two of those points came in a three-minute span midway through the quarter, allowing the Cavs to effectively end the game by boosting their lead from eight to 17 at 100-83 with just under five minutes left.

Afterwards, Waiters dismissed any thoughts that he was taking over the game in the fourth, saying,

“If it’s not one of those guys’ nights, somebody has to step up. I was just being aggressive.”

“I was really happy to see what Dion did tonight. When he’s engaged and not distracted with other things, he can play some great basketball.”

“He plays the game very aggressively. He’s learning every day. For him to have a day like today, it was huge for us.”

The Cavaliers will return to action on Tuesday night when they host Kevin Love’s former team, the Minnesota Timberwolves, in a 7 pm ET tipoff. In addition, the contest will not only mark the return of former Cav Anthony Bennett, but the first game at Quicken Loans Arena for rookie Andrew Wiggins, who Cleveland selected with the top pick back in June before sending him and Bennett in the August deal to acquire Love.