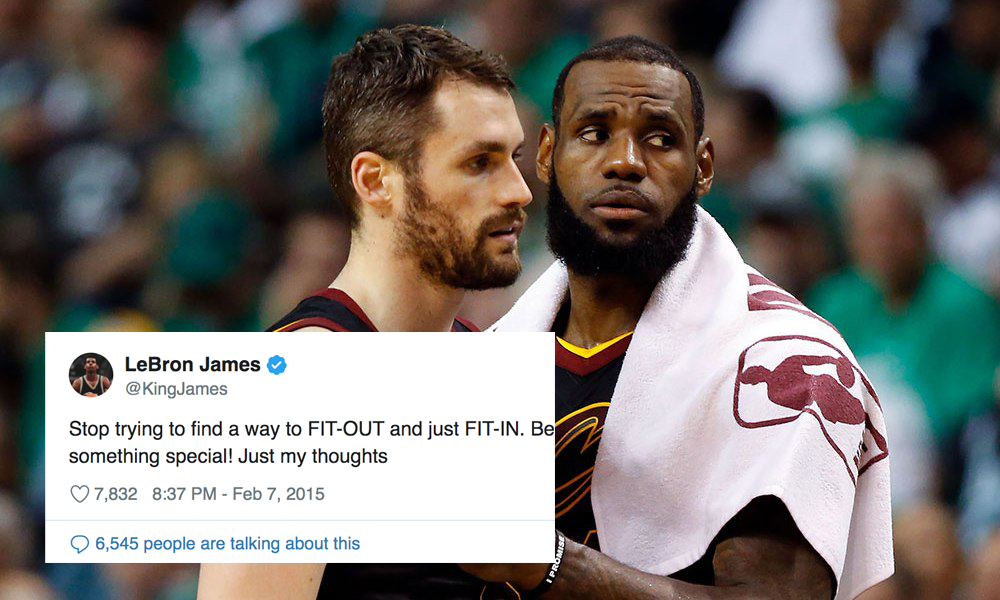 Kevin Love and LeBron James may have won an NBA championship with the Cleveland Cavaliers, but their time together was evidently not smooth sailing, especially during their first season.

Midway through the 2014-15 season, James posted on Twitter, which he eventually admitted was about Love.

Stop trying to find a way to FIT-OUT and just FIT-IN. Be apart of something special! Just my thoughts

In an interview with Jason Lloyd of The Athletic, Love spoke on the James subtweet.

”I think on one end it was extremely passive-aggressive and silly,” replied Love when asked about the fit in/fit out thing. “But at the same time, I feel like I did have to find my way and fit in. But it wasn’t an easy process for me. I think right now if that happened — it wouldn’t because I believe who I am now and the growth I’ve had — but I truly believe that you have to understand. That’s why I never make assumptions. We’ve talked before about ‘The Four Agreements,’ right? Never make assumptions, never take anything personally. Well, obviously I took that personally. I wish I could’ve handed them that book and been like, ‘Listen, you’ve got to understand what it was like to be the main focus, 20 shots a night, be ‘the guy.’’ My star dimmed a little bit to have to sacrifice. So at least just acknowledge it. All I wanted was a little bit of love. All I wanted was (a pat on the back, an arm around the shoulder). I never got that. I think I just wanted a little bit of love. Not even notoriety, just an acknowledgment of, ‘Hey, listen, we know that you’re sacrificing.’ That was not there the first year. I think Champ (James Jones) helped me to understand, ‘Listen, just be yourself and everything else will fall into place.’ But to really fully get there, it took me a year and some change.”

While Love probably thought James could have handled the situation better than by posting on social media, he admitted that James was correct in pointing out that he needed to fit in with the team. Love, though, admits that it was difficult for him as he was the one who had to sacrifice the most when the Big 3 with James and Kyrie Irving was formed in 2014.

Before being traded to the Cavs, Love averaged 26.1 points and 12.5 rebounds per game for the Minnesota Timberwolves. In his first season with his new team, those numbers dipped significantly to 16.4 points and 9.7 rebounds per game. His per-game average of field goal attempts also decreased by 5.8 shots.

However, it all worked out in the end for them as they helped lead the Cavs to their first NBA title in history in 2016.