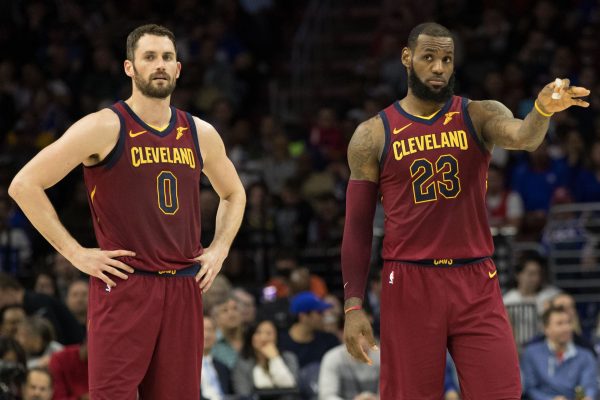 When LeBron James left the Cleveland Cavaliers to play for the Los Angeles Lakers last July, many expected his arrival to transform the Lakers into a winning team.

Things haven’t gone as planned in L.A., however, and the Lakers are currently projected to miss the playoffs. Still, many of his former Cavaliers teammates have confidence that he can lead his new team to the postseason.

Greg Swartz of Bleacher Report cited the remarks of three of James’ former teammates, each of whom got a firsthand look at the veteran’s abilities.

Channing Frye expressed his willingness to give James the benefit of the doubt:

“I don’t care if there was one game left and LeBron had to win two. I’d still wait until the last second to doubt him.”

Frye pointed to James’ role in the iconic comeback the Cavaliers made during the 2016 NBA Finals:

“Listen, no one gave us an effing inkling when we were down 3-1 or when we were fourth in the East. Then something happens when it’s crunch time, and [LeBron] just steps to another level. I’m not doubting him or that team.”

Much like the criticism directed at the Cavs during James’ time with the team, the Lakers have heavily relied on him this season. That’s a strategy that has limits, according to Frye:

Kevin Love also referenced the 2016 NBA Finals when pointing to fact that James can help make the seemingly impossible happen:

“We’ve seen in the past anything can happen.”

Another former Cavs player, Richard Jefferson, discussed James during an appearance on the “Bucher and Friends” podcast:

“Do I still think that LeBron James is the best player in the world? Yes. Is the guy injured? Yes. Has the guy played a lot of basketball? Yes. Could it be Father Time? Yes, but I still believe that if you were to put him in a seven-game series with the same amount of talent as any other player, I still believe that he comes out victorious. That’s just me because, honestly, I haven’t seen anything different in the last 13 years.”

Jefferson knows that all athletes have an expiration date, yet isn’t willing to give up on his former teammate:

“We’ve all marveled at his ability to defy Father Time, very similar to a Tom Brady. When I look at this situation, I don’t think we’re seeing the end of LeBron James.”

The Lakers have just 18 games left to make up a five and a half game deficit for the final playoff berth in the Western Conference.

Still, they remain in the hunt, as opposed to the Cavaliers without James, who currently sport a 16-48 record