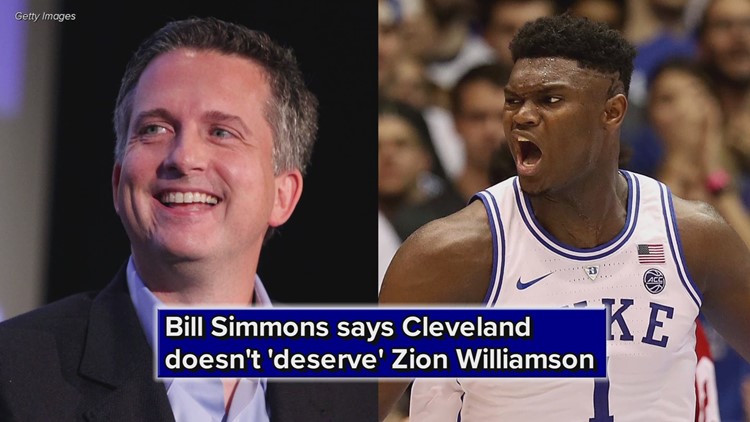 The Cleveland Cavaliers have the worst record in the NBA, and that’s putting them in prime position to draft Duke University freshman phenom Zion Williamson, but according to legendary sports reporter Bill Simmons, the Cavs don’t deserve him.

Simmons has long been both loved and hated for his impassioned opinions and ideas regarding the world of sports, but this one seems a bit outlandish even for him. In a recent episode of The Bill Simmons Podcast, Simmons claimed that if the Cavs draft Williamson, he’s done with not only basketball, but sports as a whole.

“They do not deserve Zion!” Simmons interjected.

Simmons isn’t wrong about the Cavs getting lucky with the lottery in recent years. They grabbed LeBron James, Kyrie Irving, Anthony Bennet, and Andrew Wiggins all with the first overall pick in their respective drafts. That being said, they haven’t chosen within the top five since the 2014 NBA Draft.

Meanwhile, the Phoenix Suns have drafted in the top four over the last three seasons, and before the 2018 NBA Draft, the Philadelphia 76ers had nabbed two straight No. 1 overall picks. For some reason, Simmons seems to believe that that Cavs don’t deserve an opportunity to improve through the draft like every other team around the NBA does.

Perhaps Simmons’ disdain for the Cavs organization has something to do with the fact that his beloved Boston Celtics’ championship hopes have been snuffed out by the Cavs for the past two straight seasons.

Either way, what Simmons wants doesn’t much matter to the Cavs. Ever since LeBron James left as a free agent to join the Los Angeles Lakers, it has been clear that this organization will require a complete rebuild to get back to being a playoff or championship contender.

If it can grab Williamson in the 2019 NBA Draft this spring, that rebuild will be well underway whether Simmons likes it or not.