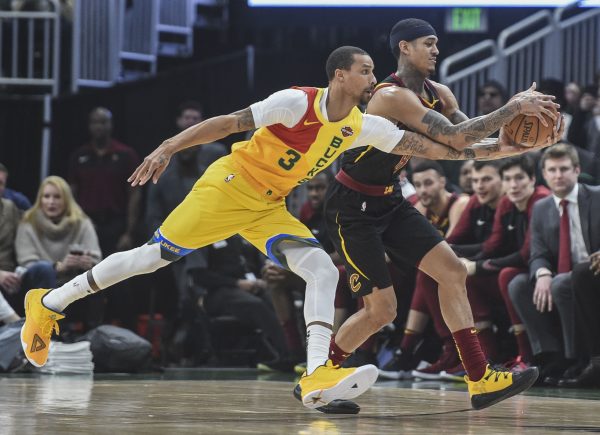 According to Cleveland Cavaliers guard Jordan Clarkson, former Cavs point guard George Hill was sad to go after he was traded to the Milwaukee Bucks earlier this month.

The topic of the Cavs’ current locker room culture came up in a recent episode of Uninterrupted’s Road Trippin,’ and Clarkson made it clear that Hill and his teammates were quite close.

“Like George is our dog and he was so sad,” Clarkson said. “He didn’t want to leave.”

Clarkson then spoke about what it was like seeing Hill just days after the trade took place when the Cavs and Bucks faced off on Dec. 10.

“You could just see it in his face. Even when he was leaving,” he said. “Then we saw him the last few days, he was still like looking in like, ‘Damn, those are my boys for real.’ We actually have a real relationship with each other.”

It’s interesting to hear this side of the story considering the fact that so many of the reports that came out of Cleveland earlier this season dealt with disgruntled veterans who wanted to be traded to a more competitive team.

While reports are one thing, hearing this straight from Clarkson’s mouth definitely carries a lot of weight.

With the Cavs, Hill averaged 10.8 points, 2.8 assists, and 2.1 rebounds in 13 minutes per game this season. Now with the Bucks, he is averaging just eight minutes and 5.3 points per game. Still, he is now on a Milwaukee team that sits in second place in the Eastern Conference with a 23-10 record rather than the bottom feeders that currently are the Cavaliers.

Either way, it’s good to hear how much players love playing in Cleveland. When the going gets tough and losses begin to mount, professional sport locker rooms can quickly fall apart. Based on Clarkson’s words, it seems the Cavs aren’t at risk of that taking place any time soon.