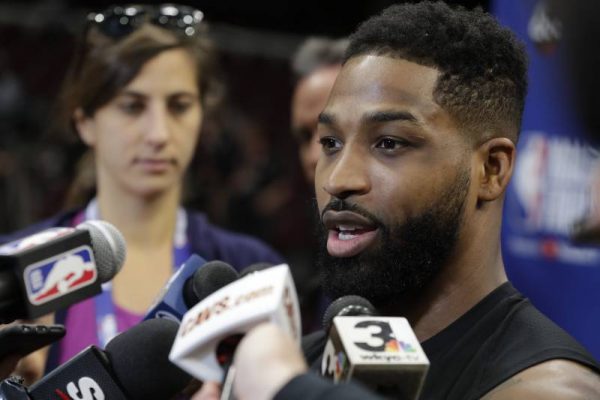 The challenge ahead facing both Tristan Thompson and the revamped Cleveland Cavaliers during the upcoming 2018-19 season is clear to everyone.

Yet on Thursday, Thompson wasn’t afraid to throw down the gauntlet toward other teams in the Eastern Conference that are expected to supplant the Cavaliers this year as the top team in the conference.

Last season, the Boston Celtics were without two key pieces in that seven-game Eastern Conference finals series: former Cavs point guard Kyrie Irving and Gordon Hayward, who were both out with injuries. The Philadelphia 76ers dropped a five-game series to those Celtics just prior to the latter’s matchup against the Cavaliers, while the Toronto Raptors were swept by the Cavs in the conference semifinals.

In making those remarks, Thompson left out the most pertinent fact in making the case for the Cavs’ chances by ignoring that LeBron James is no longer on the team. James left the team in free agency two months ago to sign a contract with the Los Angeles Lakers and his departure leaves a gaping hole in the Cleveland starting lineup.

Thompson has been the subject of some trade talk during the past offseason, with the Cavaliers in the midst of a rebuilding project. While this effort isn’t a complete overhaul, Thompson still has two years left on a contract that’s scheduled to pay him a total of $36 million over the next two seasons. Removing that from the team’s payroll would allow for some flexibility into 2020.

For Thompson’s critics, that’s a great deal of money being paid to someone they consider to be a one-dimensional player. Last season, Thompson battled injuries, playing in just 53 regular season games. He also saw his statistical numbers drop to 6.6 rebounds and 5.8 points per game, with the latter case serving as a career low.

The comments by Thompson will no doubt be remembered throughout the season by those three teams, especially if the projections of the Cavaliers being reduced to a team that’s simply trying to make the playoffs come true. The Raptors, who happen to reside in Thompson’s hometown of Toronto, will be the first team to offer that challenge when the two teams get the season started on Oct. 17 at Air Canada Centre.