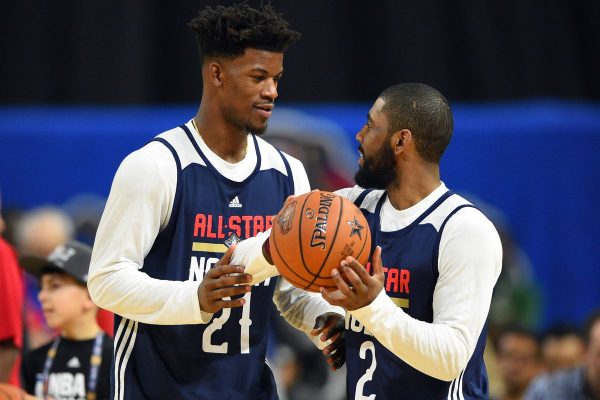 The Cleveland Cavaliers are apparently once again in pursuit of veteran forward Jimmy Butler, having first pursued him during the 2017 offseason. One key difference this time is that during that earlier period, former Cavaliers point guard Kyrie Irving made a pointed effort to dissuade Butler from coming to the team.

Kyrie told him after the 2017 season: don’t come here. Then again, things are different now https://t.co/qq6DzDbPAL

At the time of that first effort, Butler was a member of the Chicago Bulls, a team that was beginning a rebuilding phase that ultimately led to them dealing Butler to the Minnesota Timberwolves. The Cavaliers were one of the teams reportedly seeking a trade for Butler, a move that was seen as a way to get former Cavs forward LeBron James to sign an extension with the team.

Just weeks after the Butler effort failed, Irving then dropped a bombshell by requesting a trade from the Cavaliers. Among the reasons Irving cited for the trade was a need to escape playing in the shadow of James, though later stories indicated Irving’s lack of respect for head coach Tyronn Lue as well as some criticisms of the Cleveland area were also in play.

In August of last year, Irving was traded to the Boston Celtics, but was unable to play in the postseason due to injury.

During this past offseason, James left in free agency to play for the Los Angeles Lakers. While the Cavaliers are also rebuilding their roster to replace the gaping hole left by James’ departure, they still have a number of key pieces in place to compete for a playoff berth.

Acquiring Butler will presumably force them to give up some of those assets, with the added concern that Butler is expected to opt out of the final year of his contract next July. Despite such factors, the Cavaliers appear ready to make another attempt in this department.