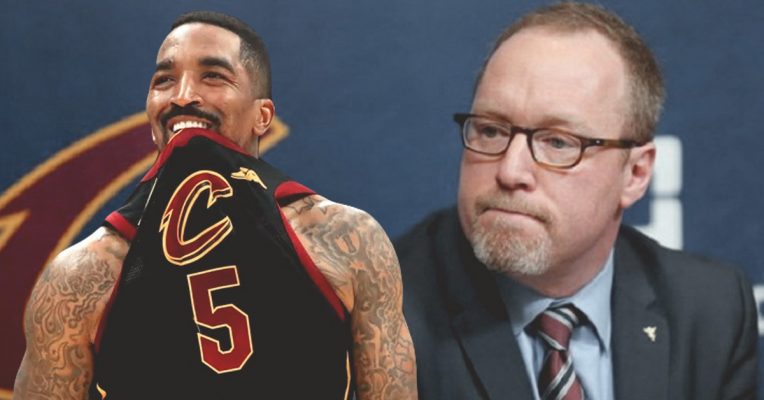 Ever since the Cleveland Cavaliers acquired shooting guard J.R. Smith from the New York Knicks in January 2015, they’ve dealt with inconsistencies that offer contrasts between lights-out shooting and minimal contributions. In the opinion of the team’s former general manager, Smith’s work ethic has been lacking since he signed a huge contract for $57 million in October 2016.

David Griffin, who signed Smith to that four-year deal, appeared on Cleveland.com’s Wine and Gold Talk Podcast and offered the opinion that receiving guaranteed money has lessened the veteran’s willingness to stay in top physical form:

“I think the fact that he got guaranteed money moving forward really made it so he was less likely to keep himself in shape than when he was going year to year. There was a reason he was so good on a year-to-year contract. So, I think to some degree, he shows up out of shape and then he gets injured getting himself in shape. I think he’s still capable of playing high-level basketball. But he hasn’t been motivated to be that since he signed the deal, so you would have to say in that situation, the deal wasn’t the right deal, because it didn’t bring out the best in J.R.”

Smith signed that $57 million deal shortly before the start of the 2016-17 campaign, then dealt with a right thumb injury less than two months later. That limited him to just 41 regular season games and kept him off the court for the next three months. Looking at Smith’s statistical numbers in the two seasons since signing that deal show that he’s averaged less than 10 points per game in each season. That’s in comparison to the first two years in a Cavaliers uniform, when he averaged more than 12 points per game.

Prior to his arrival in Cleveland, Smith’s off-the-court issues no doubt played a role in his inability to obtain a lucrative long-term contract. After completing the 2014-15 season with the Cavaliers, Smith opted out of his contract, but ended up signing a one-year deal with the team that actually paid him less than the year before.

For the upcoming campaign, Smith is scheduled to make $14.7 million, with the final year of that deal set to pay him just under $15.7 million. However, in the latter case, he’s guaranteed only $3.9 million for the 2019-20 season, which puts pressure on him to pick up his on-court production. That’s because Smith turns 33 on Sunday and would be 34 years of age when the 2019-20 NBA season begins. Such a situation could conceivably compel the Cavs to simply release him, a move that would cost him nearly $12 million.