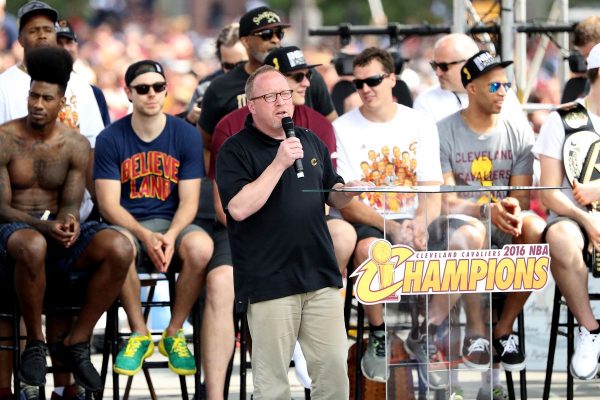 There has been much talk of the team the Los Angeles Lakers have built around four-time MVP LeBron James.

Since signing the superstar, the Lakers have acquired Rajon Rondo, Lance Stephenson, Michael Beasley and JaVale McGee. Obviously, Los Angeles isn’t trying to create the Cleveland Cavaliers 2.0 and surround James with shooters. This risky strategy could create problems and concerns. However, one executive who knows how to construct a team around James is former Cavaliers general manager David Griffin.

Griffin, who was the general manger when the Cavs won the 2016 NBA championship, offered his thoughts to Howard Beck on the puzzling Lakers roster on a recent episode of the “The Full 48” podcast:

“We started our first year together — with LeBron back and Kevin Love and Kyrie [Irving] — we started 19-20 that year,” Griffin said. “And when you go through that kind of upheaval early on, in the East, you’re able to not have a great deal of stress around, ‘We have to make the playoffs.’ And obviously with that roster, at the time we put it together, we felt really strongly that, if we just get in the playoffs, we’re gonna wreak havoc.

The first reason Griffin gives is the difficulty of the West. Back in 2014, when James was getting acclimated to playing with Kevin Love and Kyrie Irving, it wasn’t hard for the Cavs to make the playoffs. The schedule and competition was less intense.

“In the West, you don’t have that,” said Griffin. “You don’t get the advantage of, figure it out on the fly and let it take a great deal of time and start out 19-20 because your pieces are terrible fits.”

The disparity between the two conferences is huge. However, this was one of the major challenges the veteran knew he would be signing up for. Unlike last year, James will be facing some of the best teams, like the Golden State Warriors and Houston Rockets, three or four times during the regular season. Yet, the Lakers are still expected to make the postseason.

Although the Lakers may find a way to the playoffs with the best player in the league, the ultra-competitive postseason will be a different grind. With a young core and questionable pieces, the 33-year-old will have to figure a ton out. While the idea of James having to do less with the ball during the regular season may be appealing, the assembly has to be appropriate:

“I buy that they probably sold him to a huge degree on the notion that: ‘Look, we won’t ask as much of you in the regular season, so you have more in the tank in the playoffs. We’re going to put more play creation around you so that you don’t have to be asked to carry such a huge burden,'” Griffin said. “Which is great if they’re elite playmakers. Which is great if they’re super high-end ball-dominant, efficient guys.”

James, who played all 82 games last season, carried the entire load for the Cavs. Certainly, that took a toll on the 15-year veteran. Nonetheless, James would have to be the guy with the ball in his hands during the playoffs. Griffin is pessimistic James has the right surrounding cast when that time comes:

While there are plenty of question marks around this enigmatic Lakers team, the end goal remains defeating the Golden State Warriors, who appear unbeatable. Forming a wacky team might just throw them off.