Cavaliers vs. Bulls Game Preview: A Chance to Make Up Ground 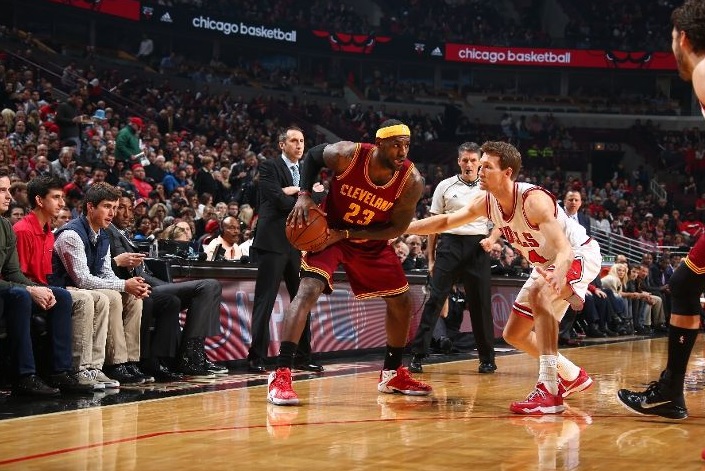 Returning home after a tumultuous five-game Western road trip, the Cleveland Cavaliers are looking to continue the success they enjoyed in the final two games of their travels, when they won back-to-back games at the Staples Center against both Los Angeles teams, the Lakers and Clippers.

In that Clippers game, Cleveland (21-20) was able to keep pace with their rivals, but was on the verge of letting it slip away in the third quarter. However, they bounced back to win it, 126-121, despite not having the services of Kevin Love, who sat out with back trouble.

The struggles on the court almost paled in comparison to all the controversy off of it, with Cavs’ Head Coach David Blatt the subject of massive rumors about his job status and control of the team. Blatt is on the verge of having all the necessary parts back in place, which will provide a much better gauge as to his overall ability as a coach.

Their opponent Monday night will be the Central Division-leading Chicago Bulls, a team they beat back on October 31 in a 114-108 overtime thriller. In that game, the Cavaliers needed to make up a five-point deficit in the final 47 seconds just to get it to the extra session. LeBron James led all scorers with 36, while Tristan Thompson was a force on the boards with 13 rebounds, including 12 on the offensive side.

Chicago has been struggling of late, having dropped five of their last seven contests. On Saturday night, the Bulls dropped a 107-99 decision to the torrid Atlanta Hawks to drop their season record to 27-15.

A pair of sprained ankles have helped to slow down the Bulls. On January 2, Mike Dunleavy began a two to three-week stretch on the injury list. Then, in a loss against the Washington Wizards last Wednesday night, Joakim Noah went down with the same problem, missing the past two games. He also sprained the same ankle last month, and is currently questionable for Monday night’s game.

Those issues likely wouldn’t get much sympathy from any other NBA team, but they definitely won’t elicit any from the Cavs, who have been inundated with injuries of their own over the past month.

Speaking of injuries, the Chicago backcourt of Derrick Rose and Jimmy Butler has seen their share, most notably Rose. Butler wasn’t available in the first meeting between these two teams, but currently leads the team with scoring at 20.6 points per game.

Rose is still plagued with injury issues, having missed 11 games this year, but when he’s on, he remains a dangerous weapon. He’s averaging 18 points per game.

In the paint, Pau Gasol remains a force with just under 19 point per game and 11.4 rebounds a contest to his credit. Taj Gibson has taken over at small forward with Dunleavy out, but Noah’s absence has forced the Bulls into a three-guard starting lineup, with Kirk Hinrich moving into that slot.

While Chicago is currently ninth overall in scoring, they’re middle of the pack when it comes to defense.

During the eight games missed by James, Cleveland was only able to win once, the strongest indication yet that his absence from the lineup will pretty much put an end to any hopes of a long postseason run.

Since returning against the Phoenix Suns last Tuesday, James has averaged just under 34 points per game, collecting his fourth double-double of the year in the win over the Clippers. In that game, he was aided by Kyrie Irving, who poured in 37.

Irving’s current backcourt mate, newcomer J.R. Smith, has shown signs that he can provide scoring punch in the lineup, but his production has been streaky. The other newcomer from that deal, Iman Shumpert is getting closer to suiting up for the first time in a Cavalier uniform, having competed in his first full practice on Sunday. Right now, his target date for returning is tentatively set for Friday.

Yet another new arrival for the Cavs, Timofey Mozgov, will have his hands full dealing with Gasol, but does provide a sturdy body in the middle of the lineup.

Love has said he’ll play, after sitting out the Clippers’ win with the back spasms he’s had over the past month. How much he plays may be based on the flow of the game, but his offense will be welcome.

One thing the Cavaliers have to improve on, besides the overall defense, is the production from the bench, which has been minimal for much of the year

Monday’s game is the first of four straight contests at Quicken Loans Arena for the Cavaliers. After this matchup, they host the Utah Jazz on Wednesday night beginning at 7 ET.