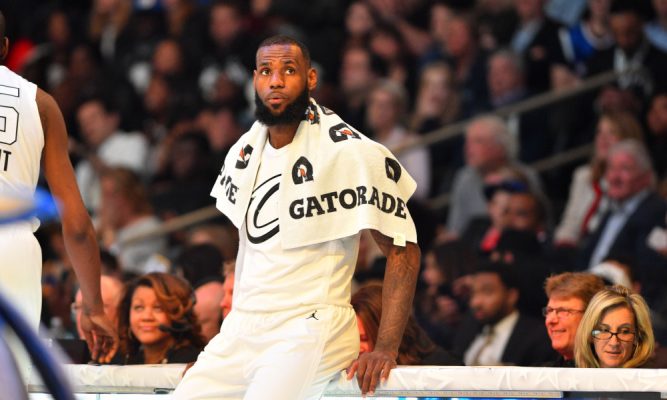 When the 2018-19 NBA schedule was released last Friday, the one game that many fans around the league looked for on the Cleveland Cavaliers schedule was their home game against the Los Angeles Lakers. That’s because the contest will mark the first and only appearance of the season by former Cavs legend LeBron James, with the clamoring to be a part of that experience clearly evident in the current ticket prices for that Nov. 21 game

James left the Cavaliers to sign with the Lakers last month, ending a magical four-year run that included him leading the franchise to their first-ever NBA title. That lingering aura, coupled with James’ worldwide popularity and his status as an NBA legend, make for an expensive single-game ticket for anyone seeking to attend the matchup.

The Cavaliers’ website currently lists the lowest ticket price at $149 for seats that are located behind the basket in the highest levels of Quicken Loans Arena. The cost becomes even more steep the closer to the court the buyer wants to be, with the more expensive tickets setting back the buyer $2,275 for near-courtside seats.

For those with the capacity to afford the cost of multiple tickets, the team has a limit of six. The category of fans who can’t afford even one ticket doesn’t mean that they won’t be able to watch the game. That’s because ESPN will be showing the Thanksgiving Eve contest.

Unlike James’ notorious first visit as a member of the Miami Heat in December 2010, this return will offer the Akron native a much warmer greeting from fans of the Cavaliers. That’s because he and the Cavs were able to bring the franchise the 2016 NBA championship. In addition, the way in which he left this time wasn’t as dubious as his largely criticized “Decision.”