Report: LeBron James Says There’s Chance He Will Return to Cleveland in Future 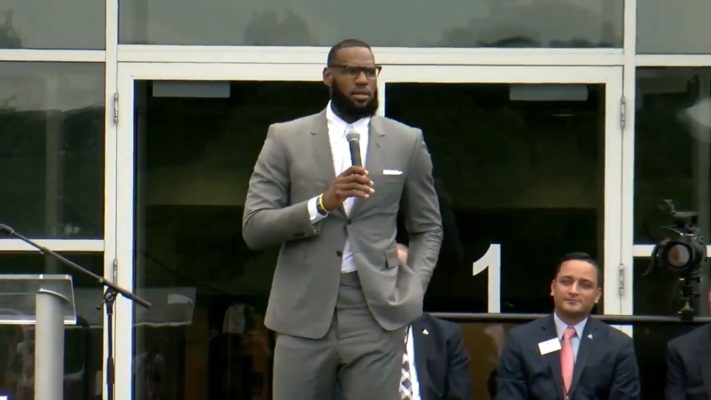 After LeBron James announced on July 1 that he was signing a four-year free agent contract with the Los Angeles Lakers, the belief by many had been that he would never again wear a Cleveland Cavaliers jersey. However, James indicated on Monday that he hasn’t completely ruled out the possibility of donning a Cavaliers uniform for the third time in his legendary career.

James was in his hometown of Akron to open up his long-awaited I Promise school that’s geared towards educating at-risk children. In the midst of that celebration, he dropped two bits of interesting news:

LeBron was not aware the #Cavs will retire his jersey. Said he would not close door on coming back and playing in Cleveland.

Cavs owner Dan Gilbert had announced after James’ departure that at some date in the future, the team would honor the future Hall of Famer by retiring his number. Given the contentious relationship between the two, it’s possible that James had originally ignored Gilbert’s comments that led to his surprise remarks on Monday.

With respect to a possible return to play for the Cavaliers, that may be more difficult to pull off. Unlike James’ short deals with the Cavs that allowed him to opt out at certain points over the past four years, his deal with the Lakers is for four years (with one year being a player option). That means that Los Angeles would either have to trade him back to Cleveland, which seems like an unlikely scenario, or the Cavs would be re-signing him right before he turns 37.

Of course, with James’ son currently in the midst of developing his own basketball talents, there’s a possibility that the Cavaliers could someday draft the younger James. Assuming the elder James is still a viable talent at that point, it would appear likely that the team and LeBron Sr. could reconnect for a third and final time.

Critics would likely charge that bringing up a possible return is an attempt to appease disappointed fans of the Cavaliers. However, unlike his 2010 decision, little or no animosity was expressed when he made his announcement four weeks ago, the byproduct of bringing the franchise its only title in 2016. In the end, whether or not this ultimately comes to fruition isn’t likely to be answered any time soon, which means that Cavs fans shouldn’t get too excited right now.