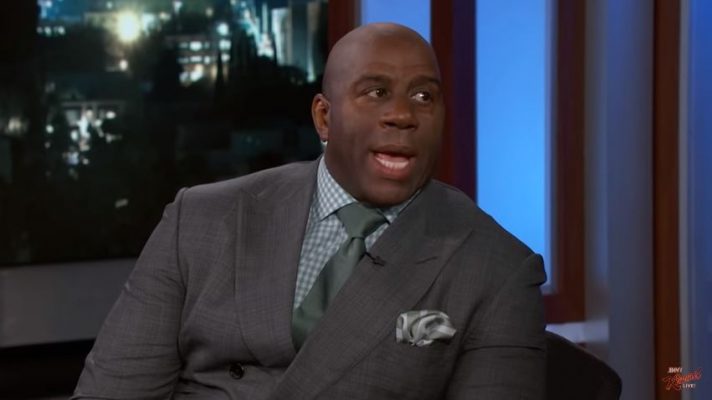 The postmortem takes on how the Los Angeles Lakers were able to recruit LeBron James from the Cleveland Cavaliers have generally been confined to members of the media offering their own reports and opinions on what took place. On Wednesday night, Lakers president of basketball operations Magic Johnson gave a firsthand account of exactly how he was able to entice James to leave his hometown team.

Johnson appeared on “Jimmy Kimmel Live!” and began by joking about his previous controversial appearance that ended up costing him $500,000. That was because the NBA had fined him for what was deemed tampering with potential free agents. He then delved into the James recruitment:

“I think we had a strong argument to him to come join the Lakers, so I couldn’t wait to get in front of him,” Johnson said. “Because I had watched all the film on him when he was with Cleveland the first time, when he was with Miami, then when he went back to Cleveland. So I had a sense of his game and what he wanted in terms of what he was looking for, but I had to get in front of him to just tell him where we are.”

Johnson then described the setup to that first meeting, which took place just moments after free agency had begun:

“We had to call and ask for permission to have a meeting, but Rob [Pelinka] called his agent, and when you think about Rich Paul is his agent. So they talked and said that LeBron would love to have a meeting with the Lakers but he wants to have it with Magic, and so that’s what happened.”

Kimmel jokingly asked if Johnson had called LaVar Ball, the controversial father of Lakers guard Lonzo Ball, to ask if he was okay with the decision. The Lakers executive left little doubt of his disdain for the elder Ball by telling Kimmel:

“I would have called you first before I called LaVar Ball.”

Johnson arrived near James’ home a full hour before free agency began, but made a point not to ring the bell of the residence until 9:01 p.m. (PT) to avoid even a hint of tampering.

“He greeted me at the door and we sat down,” Johnson said, noting that James was casually dressed. “We just started talking about how we both grew up first, and how we had probably the same expectations of, you know, people expected us to win and be good. We’re both Midwest boys, him from Ohio, me from Michigan. So we started that direction and then we headed toward the Lakers, and he broke down every player on our team: their strengths and weaknesses. He already knew the guys on our team. I was very impressed with that, and the fact that he knew that he could fit into this young core that we had. So we just started a dialogue and before we knew it, two hours had passed already, but it was a lot of Laker expectations and offense, defense. You know, how he likes to play, and what was great is, this is how he wants to play today, the way the Lakers play, with pace, and he’s really going to take our players to this (elevated) level and make them so much better.”

Of course, the Lakers are situated in the same division as the NBA champion Golden State Warriors. That will undoubtedly mean that determining just how successful James and the Lakers are won’t be evident by the end of the upcoming season. Having signed a four-year deal with the team, the expectations of what the 15-year veteran can deliver are tempered with patience, though the expectation is that continued growth will help them eventually topple the Warriors.