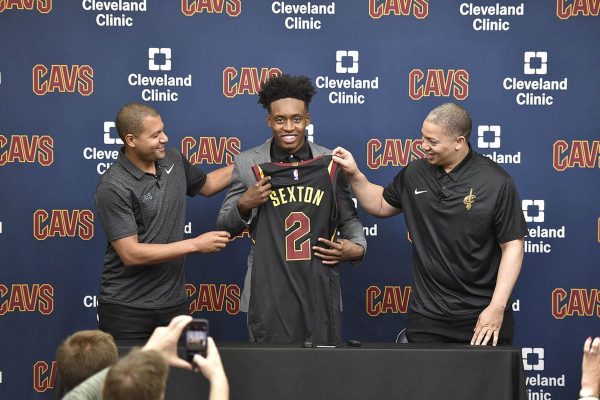 In the moments after University of Alabama guard Collin Sexton was drafted by the Cleveland Cavaliers, he was interviewed and made multiple pleas for LeBron James to re-sign with the team. Despite that desire to play with the future Hall of Famer, Sexton indicated that a retired NBA legend is actually his favorite player.

An article by ESPN’s Dave McMenamin looked at what to expect from Sexton during his first year in the league:

“He (Sexton) says his favorite player is Kobe Bryant but believes his game most resembles John Wall, Eric Bledsoe and Russell Westbrook, with the former league MVP in Oklahoma City appealing to him because, ‘I just like the energy he plays with night in and night out. He doesn’t take any plays off or any games off.'”

All four players are guards like Sexton, which likely explains the reasons connected to his selection process. Still, he’s undoubtedly well aware of James’ versatility, which has also seen the 15-year veteran play an occasional role in the Cavs’ backcourt.

The draft pick used to choose Sexton came in the deal for Kyrie Irving, who he’ll definitely be compared to during his next few seasons. One chief reason stems from the simple fact that he was given Irving’s old number when he was introduced to the media by the Cavaliers. Despite the inevitable comparisons ahead, Sexton indicated that he doesn’t feel any added pressure:

“I feel like I’m not going to have to live up to anybody’s shoes,” said Sexton. “I’m going to come in and learn and be the best player I can be on the court as well as off the court.”

The athletic Sexton does possess a strong work ethic, which includes trying to fix shooting flaws in his game by looking at plenty of video.

“Watching how I was missing and which way the ball was rotating when it was coming off my fingers and stuff like that … I feel like now I have corrected that,” Sexton said.

That determination seems natural for a player with the nickname of “Young Bull,” with Cavaliers head coach Tyronn Lue excited about the opportunity to coach him:

“When you got guys who work as hard as Collin does, to get to where he wants to get, those are the guys you want on your team and his toughness, his character, being a great student in the classroom — all that exemplifies what we want to do here in Cleveland,” Lue said. “And I’m glad he’s a part of it.”

The first opportunity that Lue and Cavs fans will get to see Sexton in action will be next month in Las Vegas as a member of the team’s summer league team. That will mark the beginning of Sexton’s effort to try and match the efforts of his favorite players.