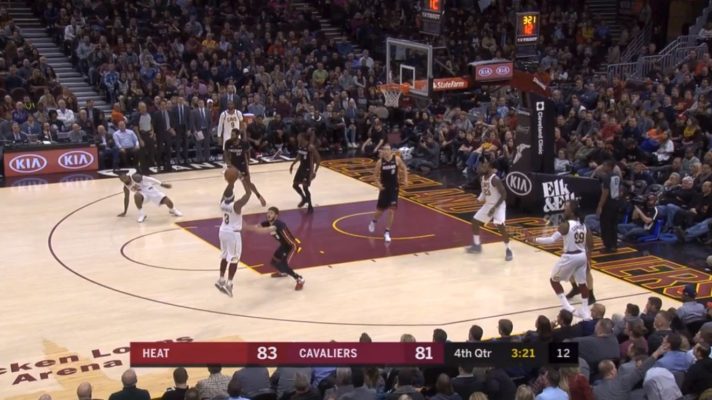 In the first Cleveland Cavaliers game of 2018 on Jan. 2, point guard Isaiah Thomas entered the game at Quicken Loans Arena to a standing ovation after having spent seven months rehabilitating an injured hip. In the team’s final game of January on Wednesday night, the mood was decidedly different as Thomas was subjected to boos from the home crowd in the midst of a brutal night of shooting from the field.

Thomas ended his night with 13 points, but shot just 2-of-15 from the field and missed all six of his attempts from long-range. The footage above captured his final missed three-point attempt.

The game on Wednesday night was only Thomas’ 12th of the season, with the rust accumulated during his rehabilitation still being shaken off. The veteran guard is a career 44 percent shooter from the field and has connected on 36 percent of his career 3-pointers, but thus far, his numbers in those respective categories are 36 and 25 percent.

With respect to his long-range production, Thomas’ touch has been especially off after success in his first two games of the season. In those early contests, he hit on 5-of-12 attempts in that category, but since then has only made 13-of-60 for a shooting percentage of just 21 percent.

Wednesday night’s game marked the first time this year that Thomas had competed in back-to-back contests, which could conceivably be the reason for his poor shooting performance. One area that hasn’t diminished in his last two games has been his aggressiveness in getting to the foul line, having connected on all but one of his 22 attempts from the charity stripe.

Thomas and the Cavaliers will have two days of rest before facing another formidable challenger in the Houston Rockets at home on Saturday night. Back on Nov. 9, the Cavaliers dropped a 117-113 decision to the Rockets in Houston, which dropped them to 5-7 on the year. However, the Cavs then embarked on an 18-1 surge over their next 19 games, something the team is hoping to occur again after their current struggles. Tipoff for Saturday night’s game will be just after 8:30 p.m. ET.