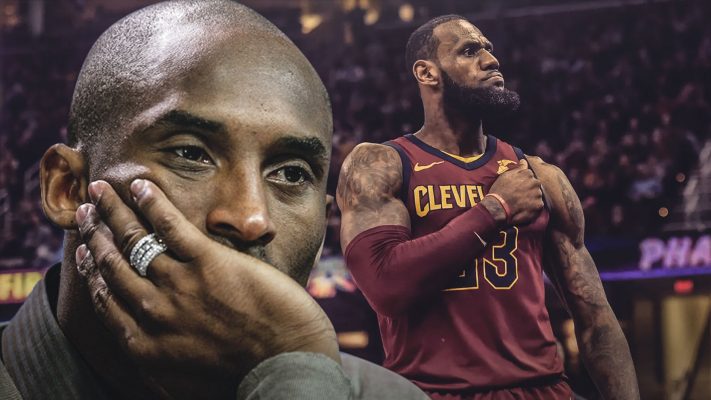 The frustration felt by Cleveland Cavaliers forward LeBron James in coming up short in the NBA Finals has some individuals questioning the legacy he’ll be leaving behind. Future Hall of Famer Kobe Bryant indicated in part that it will take more introspection on the part of James to improve on his 3-6 record in the finals.

Howard Beck of Bleacher Report conducted a roundtable discussion that included Bryant and other former NBA players, with the only current player in the group being longtime veteran Vince Carter. The chat largely focused on James’ legacy.

Bryant spoke about how his method of ranking great players boils down to their ability to deliver a title:

“If I’m Bron, you got to figure out a way to win. It’s not about narrative. You want to win championships, you just gotta figure it out.”

The belief that too much of a burden is being placed on James because of a weak supporting cast was something that connected with Bryant, who compared it to his own situation as a player with the Los Angeles Lakers:

“Phil [Jackson] used to say this thing to me a lot, when I was doing a lot on the court,” said Bryant. “He’d say, ‘You have to do less.’ And I’d say, ‘Well, my teammates got to step up more.’ Phil would say, ‘Well, it’s your responsibility to thrust the game upon them.'”

James has had the Golden State Warriors serve as his roadblock to winning more titles, losing to them in three of the last four years. Facing a team of that caliber also caused Bryant to reflect on a conversation he had from a decade ago:

“Michael [Jordan] gave me some really good advice after the ’08 Finals: ‘You got all the tools. You gotta figure out how to get these guys to that next level to win that championship,'” Bryant said. “Going into the 2010 series, I said, ‘Listen, Boston, they got Ray Allen, they got Paul Pierce, they got [Kevin] Garnett, they got Sheed [Wallace], the talent is there. They’re stacked.’ That was the first superteam. [Michael] kind of heard me lament about it, and he just goes, ‘Yeah, well, it is what it is; you gotta figure it out. There’s no other alternative.’ And that’s the challenge LeBron has. You have pieces that you have to try to figure out how to work with. Excuses don’t work right now.

“It has everything to do with how you build the team, from an emotional level. How do you motivate them? … Leadership is not making guys better by just throwing them the ball. That’s not what it is. It’s about the influence that you have on them to reach their full potential. And some of it’s not pretty. Some of it’s challenging, some of it’s confrontational. Some of it’s pat on the back. But it’s finding that balance, so now when you show up to play a Golden State or a Boston, your guys feel like you have the confidence to take on more.”

Bryant’s rigid method of basing the greatness of a player on the number of titles they’ve won would rank him ahead of James, since the former Laker was part of five NBA title teams, compared to three for James.

However, two other Laker legends, Jerry West and Elgin Baylor, endured even more frustration during their career than James has in his six finals losses. Both of their legacies remain solid, with James’ overall numbers during the regular season and postseason topping both players. Thus, the debate over the legacy of James may ultimately have to encompass far more than simply the number of championship rings acquired.