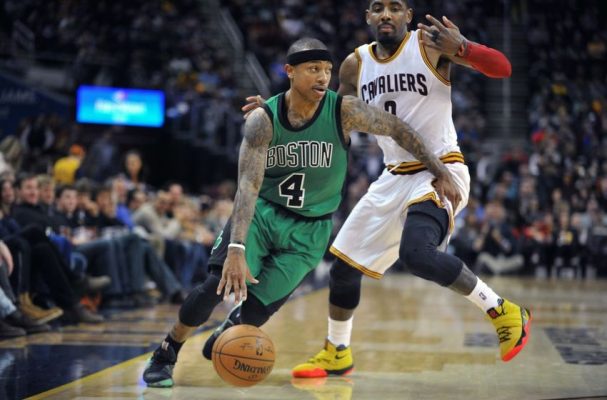 During his six years in the NBA, Cleveland Cavaliers point guard Kyrie Irving has established himself as among the elite on the offensive end, especially in the clutch. However, he and the team have been struggling on the defensive side of late, with the Cavs allowing at least 120 points five times during the month of March.

Last week, Cavaliers head coach Tyronn Lue changed Irving’s defensive responsibilities after putting J.R. Smith back in the starting lineup so that Irving is now responsible for covering his counterpart at point guard. In the Cavs’ win at Charlotte on Friday and their loss the following night at home, both of those teams’ starting point guards flourished during their time on the court.

Charlotte’s Kemba Walker and Washington’s John Wall combined for 65 points on 24-of-41 (58 percent) shooting during those two games. Walker was able to move about freely to score 28 points, while Wall tossed in 37 points, including 18 during the first quarter.

“Last time we played, Brad (Bradley Beal) got it going so we started out being very aggressive on his pick-and-rolls and John was coming off and he started off with a midrange jump shot in transition and when he gets a good feel, he starts pushing it every time and an even better feel, he starts hitting 3-point shots,” Irving said. “When he starts playing like that at a high level, he’s tough to maintain and he showed signs of that. Going forward, we’ll be better prepared.”

Lue was sympathetic to a point with Irving’s situation:

“It’s a lot of pressure to have him be one of our scorers and then having to guard the best player on the other team,” Lue said. “It’s tough, but it’s part of the NBA. Every night he’s going to have a tough matchup, along with those (other point guards). They’ve got a tough matchup when they have to guard him so just have to step up and do it.”

Irving himself knows that other teams will be looking at the recent success of Cavs’ opponents and try to take advantage of the fact that no solution has been found yet. Yet he still feels comfortable with the team’s approach:

“It doesn’t change anything,” Irving said. “Offensively and defensively, it’s the same mindset. Our rules that we stick to with whatever point guard that we’re playing against, we just got to stick to our defensive gameplan if those guys are making shots and we go into a blitz action and try to stop them a little bit. But when they’re hitting outside shots, hitting their midrange shots, they’re tough to contain. On the flipside, I still got to stay aggressive offensively and get my teammates involved.”

Part of the issue for Cleveland has been trying to adjust to new acquisitions and the return of injured players, with lineups constantly in flux. That explains in part why the Cavaliers are now ranked, from a statistical perspective, as the second-worst defensive team since the All-Star break.

Many of the playoff teams the Cavs could face have a potentially dangerous point guard to handle. Still, LeBron James is confident that Lue and his coaching staff will work out an effective plan during the remaining two-plus weeks of the regular season:

That effort begins with a stiff challenge as the Cavaliers travel to San Antonio for a nationally televised game against the Spurs on Monday night.