Don't Miss
Home / Rumors / Report: LeBron James and Paul George Will Have Conversation About Teaming Up in Los Angeles

Report: LeBron James and Paul George Will Have Conversation About Teaming Up in Los Angeles 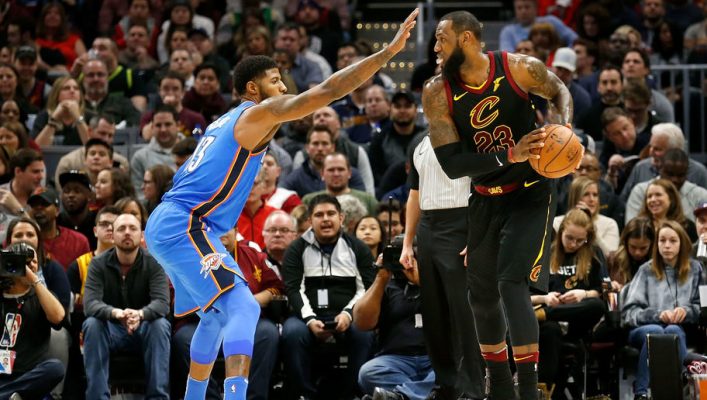 The prospect of Cleveland Cavaliers forward LeBron James leaving the team after this season as a free agent has been a frequent topic of discussion over the past year. One of the most talked-about potential destinations for James has been the Los Angeles Lakers. That possibility resulted in ESPN’s Adrian Wojnarowski stating on Tuesday that James and the Oklahoma City Thunder‘s Paul George plan to discuss the prospect of signing with the Lakers prior to the start of the league’s free agency on July 1.

“That’s gonna be a conversation or conversations (George and James) are gonna have once we get toward July,” Wojnarowski said.

Wojnarowski appeared on the network’s pre-draft special and noted that the Lakers are one of the few teams that would be able to carve out the necessary salary cap space.

George’s expected free agency status resulted in the Indiana Pacers dealing him to the Thunder last June. He’s a native of Los Angeles, while James owns two mansions in that area. In addition, James has spent much of the past two summers in Los Angeles. That’s resulted in the rumor mill working overtime about him eventually living there year-round as a member of the Lakers.

Both players could end up re-signing with their respective teams, but both are still expected to opt out of their current contracts and test the free agent marketplace. While this will mark George’s first foray into free agency, James has twice left teams to play elsewhere. In 2010, he signed with the Miami Heat and was part of two NBA championship squads. Four years ago, he returned to the Cavaliers and helped lead them to the 2016 title, with his teams having made the NBA Finals in each of the last eight seasons.