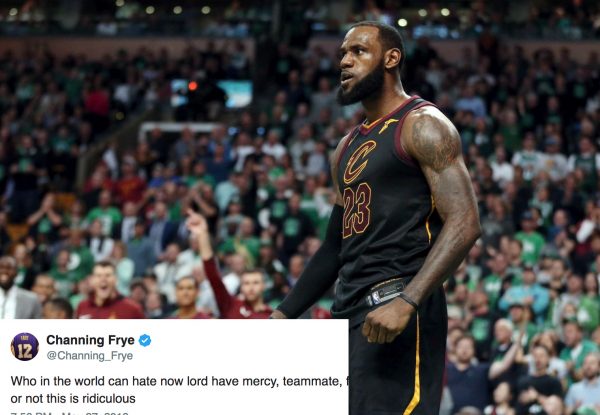 The Cleveland Cavaliers advanced to their fourth consecutive NBA Finals with a thrilling 87-79 victory over the Boston Celtics. One of the many viewers watching the game on television was a member of the 2016 title-winning Cavs team, Channing Frye, who was traded in February but remains close to his former teammates. Immediately after the game, he used social media to express his thoughts about the win.

Who in the world can hate now lord have mercy, teammate, friend or not this is ridiculous

Though Frye didn’t mention any particular player, it’s obvious he was impressed with yet another standout performance by LeBron James. Playing all 48 minutes, James scored 35 points and grabbed 15 rebounds for a double-double. He narrowly missed making that a triple-double by dishing out nine assists.

Frye’s cryptic remark was also likely a tribute to the Cavaliers fighting back from the 2-0 deficit, along with having to win in Boston in a Game 7. Up until Sunday night’s loss, the Celtics had yet to lose at home in this postseason and have a storied legacy with their array of NBA championships.