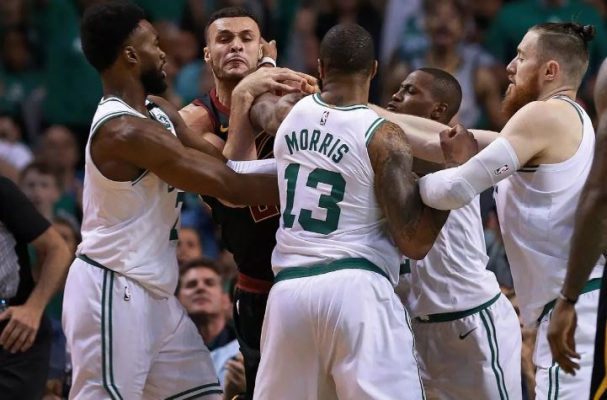 The hotly contested Eastern Conference Finals between the Boston Celtics and Cleveland Cavaliers became even more heated in Game 5.

Early in the second quarter, LeBron James delivered a pass to Larry Nance Jr., which Boston’s Marcus Morris anticipated. As Morris and Nance collided in the air, the latter fell hard to the floor. Seeing his opponent down, Morris talked trash to Nance which infuriated the Cavaliers’ big man. He retaliated by shoving Morris who was already walking away and the two went at it before teammates and referees separated them.

After the referees reviewed the play and the scuffle that ensued, Morris and Nance were assessed technical fouls while the Celtics’ Terry Rozier was also called for a technical for pushing Nance during the altercation.

After the game, Morris was asked what he said while he was staring down his fallen rival.

“I definitely can’t say that on the camera,” Morris said. “But it must have got to him, because he got up and he did his little whatever you want to call it.”

The Cavs were down by 17 points, 36-19, when the play happened. The frustration of facing a huge deficit could have played a part in the 6-foot-9 Nance’s reaction to the taunting being dished out by the Celtics’ enforcer.

The fight fired up the Cavs as they went on a 9-0 run. But they couldn’t sustain the momentum as the Celtics eventually won 96-83. Boston now leads the series 3-2 and can wrap up the series in Cleveland if they win Game 6 at Quicken Loans Arena.

But the Celtics have struggled mightily on the road in the playoffs and the Cavaliers need to capitalize on this weakness in their opponent.