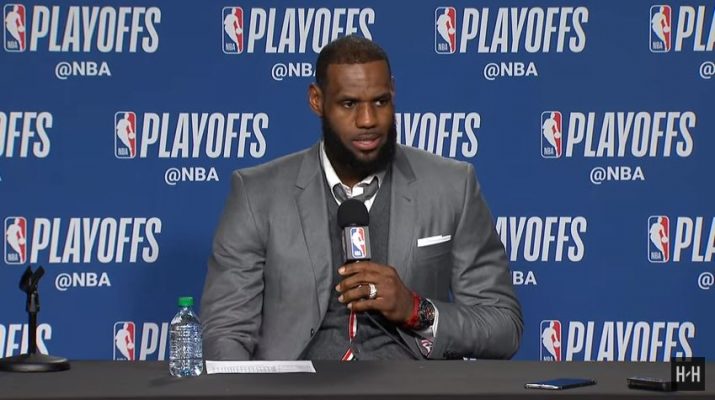 There wasn’t much rest for the Cleveland Cavaliers to look forward to after playing seven games versus the Indiana Pacers. Two days after Game 7, the Cavaliers took the floor at Air Canada Centre to begin another best-of-seven series, this time against the Toronto Raptors.

Fortunately for the Cavs, fatigue wasn’t enough to keep them from winning Game 1 as they left the court with a 113-112 overtime victory.

LeBron James had a triple-double, even though he played poorly at certain points in the game. Nonetheless, he recorded 26 points, 11 rebounds, 13 assists and added a steal and a couple of blocks for good measure too. For most, that’s a once-in-a-lifetime stat line. However, James shot just 12-of-30 from the field including 1-of-8 from the three-point line. The Cavs also had a few late game possessions in which his decision-making was questionable.

In the postgame interview, James was asked if he was still feeling the effects of fatigue from the previous series. He revealed that something has been ailing him since Game 7.

“I definitely wasn’t as efficient as I like to be,” he said. “I missed a lot of open looks. A lot of open threes that they were going under, a lot of floaters in the lane. Because of the injury I had in Game 7, I didn’t get the opportunity to get on the court this morning and yesterday as well.

But at the end of the day, the only thing that matters is to try and get a win and my teammates were unbelievable tonight. They stepped up when I wasn’t at my best.”

That injury might explain why he missed many of his jumpers late, especially those he launched from beyond the arc.

Despite his shooting woes, James had his moments when the Cavs were rallying from a 14-point deficit. He nailed his only three-point basket with 4:48 left in the ballgame to cut the lead down to one at 100-99. Then, with the Raptors leading by two, the four-time MVP made a tough, turn-around, fadeaway jumper with 30.3 seconds left in regulation to tie it up at 105-all.

No matter how badly he shot the ball in this game, all that really matters is that he played well enough for them to win.

cleveland cavaliersfeaturedlebron jamesnews tickerToronto Raptors
← Previous Story Kevin Love Says He Wants to Start at Power Forward, Despite Tyronn Lue’s Insistence
Next Story → LeBron on Kevin Love Wanting to Play 4: ‘We Have to Listen to What Kev Needs’