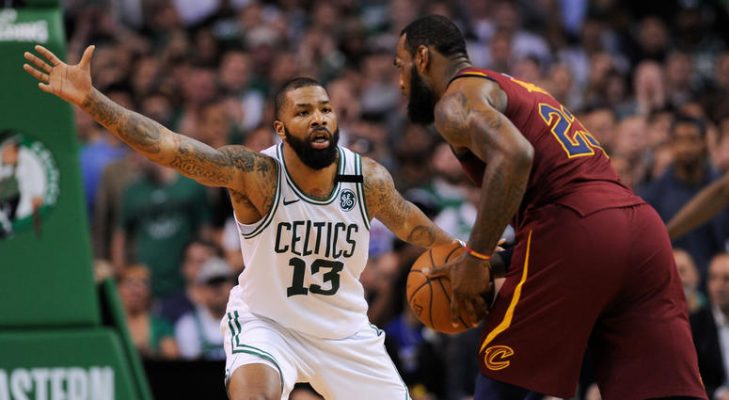 For almost the entirety of the 2017-18 NBA season, LeBron James has seemed indestructible. He played in every single one of the Cleveland Cavaliers 82 games in the regular season and his usage has only increased during the NBA playoffs.

So far in the postseason, James has been averaging 38.6 minutes per game. In Wednesday night’s Game 5 against the Boston Celtics, all those minutes appeared to take a toll. Whenever James got a brief moment of rest on the Cavs’ bench, he seemed utterly exhausted.

Following the 96-83 loss in Game 5, James commented on his level of fatigue, saying that everyone on the court is “worn down at this point” in the playoffs. Celtics forward Marcus Morris, one of the players charged with defending James, noticed fatigue having an impact on James as well.

“Yeah, I seen it,” Morris said. “We threw a lot of different bodies at him. He has to do a lot for that team, obviously everybody knows. These games are coming up pretty quick. Games are coming fast. At the end of the day, s–t, I’m tired, everybody else is tired.”

Morris went on to comment on the Celtics’ young stars Jaylen Brown and Jayson Tatum, saying their youth has served as an advantage against the much older Cavs roster.

“They can play all day,” Morris said of his young teammates. “They continue to play. They’ve been playing 40, 39 minutes each and every game and it doesn’t seem like they’re slowing down. They’re playing at such a high level. It’s like playing pickup, they don’t even have to stretch. They just go in there and get it done.”

James finished Game 5 with 26 points, 10 rebounds, and five assists. While those stats are undoubtedly impressive, it is possible that his fatigue in Wednesday’s game, and the series overall, has influenced his play. The four-time MVP turned the ball over six times in Game 5, and he is averaging 5.8 turnovers per game in the series, well above his career average.

With the Cavs’ season on the brink, James will likely be able to overcome his fatigue and put in a dominant performance in Friday night’s Game 6 in front of a home crowd. If the Cavs win that game and extend the series to a seventh and final game, it will be fascinating to see if he can push past his exhaustion one more time and lead Cleveland to a fourth straight NBA Finals.

featuredlebron jamesmarcus morrisnews ticker
← Previous Story Why It’s ‘Killing’ Kyrie Irving Not to Be Playing Against Cavaliers
Next Story → LeBron James Reveals How He Feels Heading Into Game 6 vs. Celtics