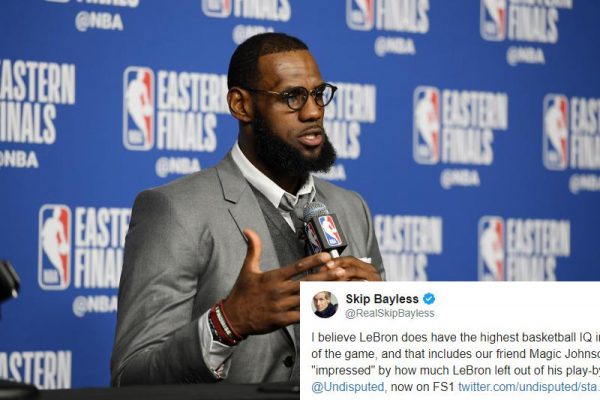 During the course of Cleveland Cavaliers forward LeBron James‘ 15 years in the NBA, one of his most severe critics has been media personality Skip Bayless. The criticism from Bayless has often gone out of its way to find fault with James, yet in the wake of the Cavaliers’ disastrous Game 1 performance against the Boston Celtics, Bayless actually found time to at least partly compliment the veteran’s basketball intellect.

Bayless, one of the co-hosts of FS1’s “Undisputed,” tweeted about James’ postgame remarks after Cleveland dropped a 108-83 decision to Boston on Sunday afternoon. Those comments included a detailed description of how the Celtics ran off seven unanswered points in the early moments of the fourth quarter, which helped end any chance of a comeback by the Cavs.

I believe LeBron does have the highest basketball IQ in the history of the game, and that includes our friend Magic Johnson. But I was "impressed" by how much LeBron left out of his play-by-play. More @Undisputed, now on FS1 https://t.co/KnD1DqJ1M4

Of course, even in the course of offering a compliment to James, Bayless couldn’t resist delivering more criticism toward him on the air:

"LeBron is getting crazy runaway internet credit … LeBron's photographic memory. Well, he didn't photograph what he did wrong in that sequence, right?" — @RealSkipBayless pic.twitter.com/aDMeSOIcrj

Hours later, Bayless continued the onslaught on James with another pair of tweets:

On LeBron's "total recall," the reporter was asking WHY the Cavs collapsed to open the 4th q, not HOW. LeBron dodged question by reciting play by play the reporter already had. For that he deserved applause???

LeBron's "total recall" was actually a sanitized play by play omitting 2 details. Marcus Smart hit the 3 bc LeBron loafed on defense. Then, he said, "We missed another shot." Nope, LeBron, you threw a lob too high for Tristan. Turnover No. 6 for you. No applause for you.

In the event that anyone might think that Bayless was done taking potshots at James, a comparison between James and retired Los Angeles Lakers guard Kobe Bryant was then made:

Kobe WAS a more skilled jumpshooter, free-throw shooter and ball-handler than LeBron. He also made 1st team all-defense 12 times to LeBron's 6. Finally, I give him the edge in killer will (Mamba Mentality). No, we haven't forgotten, Kobe.

In reality, the loss on Sunday was just one game, which means that the Cavaliers can send the series back to Cleveland tied at 1-1 with a victory on Tuesday night. That basketball IQ of James that Bayless spoke of, which has helped his teams reach the last seven NBA Finals, will undoubtedly take into consideration all of the criticism and speculation from countless media members. The end result likely to be a strong effort in Game 2, with that contest scheduled for tipoff just after 8:30 p.m.