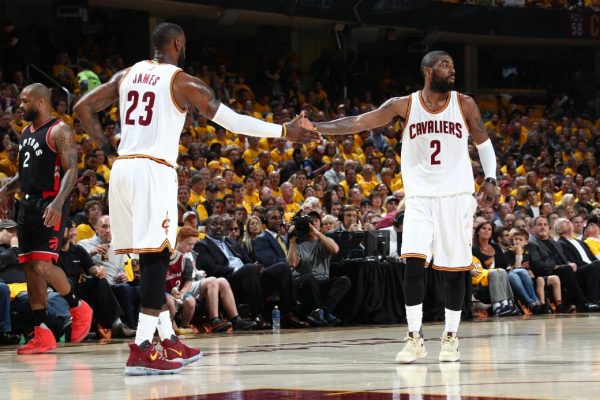 As LeBron James and the Cleveland Cavaliers prepare for yet another Eastern Conference Finals series against the Boston Celtics, the offseason move that sent All-Star point guard Kyrie Irving from Cleveland to Boston is back on everyone’s mind.

Though Irving will be enjoying the series from the bench, as he is still recovering from a recent knee surgery, he will surely be cheering on his current Boston teammates over his former Cleveland ones. According to former Cavs general manager David Griffin, much of the blame for Irving’s departure last season should rest on his shoulders.

Griffin joined the “Bill Simmons Podcast” earlier this week and called the divide that developed between James and Irving one of his greatest failures.

“Yeah, it’s funny — he’s perfect, and I’ll think of it as one of the biggest failures of my time in Cleveland that I couldn’t grow that to a level of individual accountability where they felt that beholden to each other,” Griffin said. “I think one of the things that really separates Kyrie, LeBron, KG (Kevin Garnett), I think they all have this: They’re all superstar-talented, but they desperately want to be told what they need to hear.”

Griffin continued to explain that he understands why Irving ultimately requested the trade that ended his tenure with the Cavs. He explained that James’ decision to sign with the Cavs in 2014 took the leadership role over the team out of Irving’s hands.

“So you’re Kyrie, you’ve been carrying a very bad team, you now re-sign, you successfully recruit a bunch of All-American–, Team USA–kind-of players that you’re ready to win with, you’re gonna be The Man on that team, and then you’re not,” Griffin said.

“So I think his development was stunted from what he was led to believe, it was going to be just by virtue of the situation. And that’s really unique. I don’t think that’s true of Durant’s situation, [but] at the same time, I think you’re right — Durant had to leave to really be in the situation that was the ultimate expression of his greatness, and I think that’s what Kyrie chose to do.”

Finally, Griffin concluded that Irving’s decision to leave was not because he simply wanted to be the man on the team, but because he wanted to find out how good he could truly be.

“It wasn’t about being the man, it’s ‘how good can I be? What am I capable of? LeBron can score, he doesn’t need me to score. LeBron can make all the passes, he doesn’t need me to do that. I’m not a better defender than he is,’” Griffin said. “So I think you get to the point where the fit and the need LeBron had for Kyrie wasn’t going to allow him to become Scottie because he didn’t need Kyrie to fill in the gaps necessarily.”

It’s interesting to consider that while Irving may have wanted to prove that he can lead a team to great success on his own, both the team that he was on last season and the team that he played on this season have advanced to the exact same place that they met in last season’s playoffs without Irving on the court.

If James elects to stay in Cleveland this offseason, and Irving returns to his pre-injury form, it is quite likely that both teams could meet in the Eastern Conference yet again next spring. If that comes to pass, this rivalry will continue to be one of the most compelling in today’s NBA.