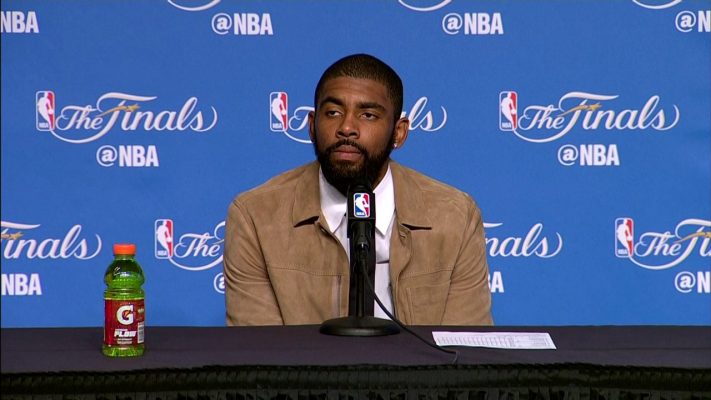 Months have passed since Kyrie Irving requested a trade from the Cleveland Cavaliers during the summer of 2017. Since then, reports have slowly been leaking out through different sources regarding details as to what exactly led to Irving’s unusual demand.

In a recent piece from ESPN’s Dave McMenamin, it was revealed that a select number of “front-office personnel, coaches and team support staff members” decided to meet for an impromptu meeting to consider several “what if” scenarios in regards to Irving’s future with the team.

This happened on draft day, a time when the Cavs had every opportunity to trade Irving for any of the top draft picks along with a young player or two who had the potential to be a star or stars someday. Or, they could have even swapped him for another veteran, such as Paul George or Jimmy Butler, who could have immediately helped the Cavs win a championship the following June.

But according to McMenamin’s source, the discussion was nothing but mere “small talk” meant to gauge the market for a young star who could carry a franchise on his own especially after getting a taste of a championship a year earlier.

Unfortunately, word leaked out to Irving about the talk, something that any player in his position didn’t deserve to know or hear about no matter how informal the discussions were.

As noted by the source, discussions surrounding a franchise-type player “should be handled strictly between the GM and owner, because of the sensitive nature of its content. Once a player feels expendable or undervalued from his own team, getting him to buy back in is a prickly proposition.”

Former GM David Griffin had been fired before draft day, one possible reason which could have brought on the sloppy handling of the talk. In fact, if Griffin had been there, it’s likely that the “small talk” would not have been entertained in the first place.

At the time, current GM Koby Altman and assistant GM Mike Gansey were merely taking on their roles on an interim basis even though they too were involved in the draft-day discussion.

No one knows for sure who leaked the information to Irving, but one thing was clear, he would never again play for the Cavaliers.

Irving had been with the Cavaliers since he was drafted by the team as the first pick overall in the 2011 draft. He was content to wait it out until LeBron James surrendered control of the team to him.

But that was until last summer’s draft-day “small talk” happened and it ruined any hopes of Irving ever playing for the Cavaliers’ franchise once again.