Video: Tyronn Lue Explains What Could Be Wrong With Kevin Love 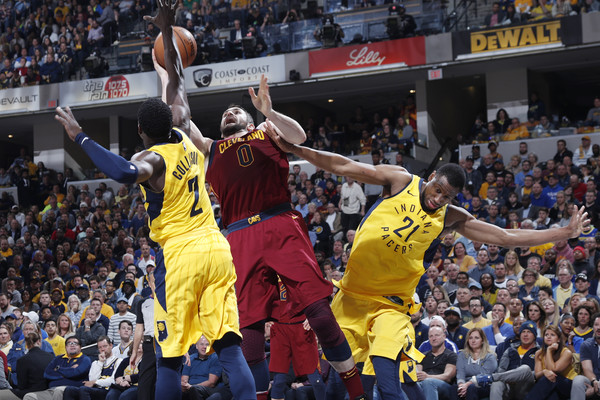 After six playoff games against the Indiana Pacers, the Cleveland Cavaliers have yet to see any semblance of the double-double machine that is Kevin Love. He was M.I.A. in the all-important Game 6 on the road when LeBron James needed his fellow All-Star to have his back.

The most that Love has scored in this first-round playoffs series is 19 points in a 92-90 loss in Game 3. In last night’s game, he only scored seven points on 3-of-10 shooting and grabbed seven rebounds in 24 minutes of action. Had he scored at least 18 points (17.6 was his scoring average in the regular season), things could have been different for the Cavs who lost by 34 points.

In the postgame interview with Tyronn Lue, the Cavs head coach was asked why he thinks Love has been struggling to score against the Pacers throughout this series. Like many of us, it appears that Lue doesn’t have a definite answer.

“Offensively, he hasn’t scored the ball as good as he’s capable of scoring. Like you said it could be the thumb, a lot of it could be fatigue,” said Lue. “He’s running around blitzing [Victor] Oladipo at half court then sprinting back getting to the possession. So it could be multiple things but we just got to play better.”

If the Cavs wish to continue playing in the postseason, Love has to show up on Sunday and give the team everything he’s got regardless of injury or fatigue. As Cleveland’s slogan would say, “Whatever it takes” Kevin. Whatever it takes.

cleveland cavaliersfeaturedkevin lovelebron jamesnews tickerTyronn Lue
← Previous Story Video: LeBron James Goes Down After Taking Brutal Elbow to Face
Next Story → LeBron Speaks on What Went Wrong in Game 6 and What Cavs Need to Do in Game 7