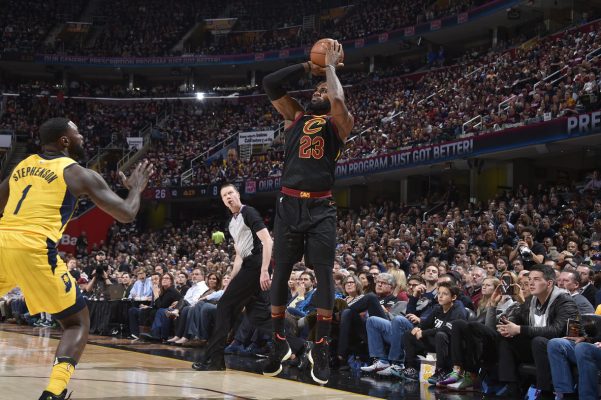 (Cleveland, OH) — LeBron James scored 46 points and hit four clutch free throws in the final minute to help the Cleveland Cavaliers even their first-round series against the Indiana Pacers in Game 2 at one game apiece with a 100-97 victory at Quicken Loans Arena on Wednesday night.

Collecting a double-double on the night, James’ 46 points came on 17-of-24 from the field, with 12 rebounds and five assists also playing a key role in the win. Only two other Cavs players scored in double figures, with Kevin Love tallying 15 points and grabbing eight rebounds, while Kyle Korver notched 12 points, all of them coming on his four 3-pointers.

Prior to the game, Cavaliers head coach Tyronn Lue had made a starting lineup change, inserting J.R. Smith and Korver in place of Jeff Green and Rodney Hood. After the game, Lue cited Smith’s defensive work on Oladipo as one of the keys to the win:

“J.R.’s defensive aggressiveness was good for us,” Lue said. “He did a good job of denying Oladipo.”

The Cavaliers were continually unable to put the Pacers away until the closing seconds. Clinging to an 80-76 advantage with 9:06 to play, the Cavs scored eight of the next 10 points, but watched the Pacers again chip away at their deficit. After the margin dipped to just three points at 95-92 with 51.2 seconds left, an offensive foul on the Cavaliers’ George Hill led to the Pacers’ Victor Oladipo having the opportunity to tie the game, but his miss on a wide-open 3-pointer with 27.5 seconds to go was then converted into two free throws from James. That was repeated in the ensuing possession and was enough to provide breathing room for the victory.

“J.R. and Kyle were huge defensively in the fourth quarter. We needed that from them,” James said. “We blew a coverage, but we were lucky.”

Cleveland sharply reduced Indiana’s effectiveness on 3-pointers compared to the Game 1 loss, limiting them to six for the game. However, the Pacers scored 62 points in the paint, many coming on easy baskets.

“You have to give up something,” Lue said. “But to keep them under 100 points for two games is good for us.”

A scary flashback for the Cavaliers came with 3:43 left in the game when Love left the game for good, holding his left hand and wincing in obvious pain. However, Lue said during his postgame press conference that Love was okay and that he would play in Game 3 on Friday night.

James had roared out of the starting gate, scoring the Cavaliers’ first 16 points of the game. The first 13 of those came without any scoring response by the Pacers, with the Cavs boosting their lead to as many as 18 points during the quarter. By the time the period had ended, Cleveland had held a 33-18 lead, aided primarily by their 67 percent (14-of-21) shooting from the field and their five 3-pointers.

“I made some shots early and got into a rhythm,” James said. “We were more physical at the point of attack.”

That shooting touch for the Cavaliers evaporated over the first seven minutes of the second quarter as they hit just 2-of-8 from the field to start the second quarter. That fueled a 17-6 surge by the Pacers that sliced their deficit to just four points at 39-35 with 5:33 left before intermission. James then got the Cavs back on track until halftime arrived by scoring eight of his nine points in the period. When the two teams left the court, the Cavaliers maintained a 58-46 advantage.

“Our mindset was that we tried to be physical as much as we could every possession,” Smith said. “Ain’t no time to be tired. Ain’t no time for injuries.”

After the break, Cleveland continued to hold a double-digit lead for the first seven minutes of the third quarter, but then saw Indiana twice chop the margin down to five points. The Pacers also had multiple opportunities to make it a one-possession game, but the Cavs were able to make stops when it counted. At the end of the third, the Cavaliers held a seven-point lead at 74-67.

“He did a great job of being aggressive and setting the tone early,” Lue said of James. “It got our defense going, too.”

The scene now moves to Indianapolis for the next two contests, with Game 3 set for Friday night and Game 4 ready to tip off on Sunday night. The Friday night clash will get underway just after 7 p.m. ET.

“All 16 teams in the playoffs punched their ticket for a reason and Indiana is one of those teams,” James said about the challenges ahead. “We gotta be ready to play because we know it’s gonna be in a hostile environment.”