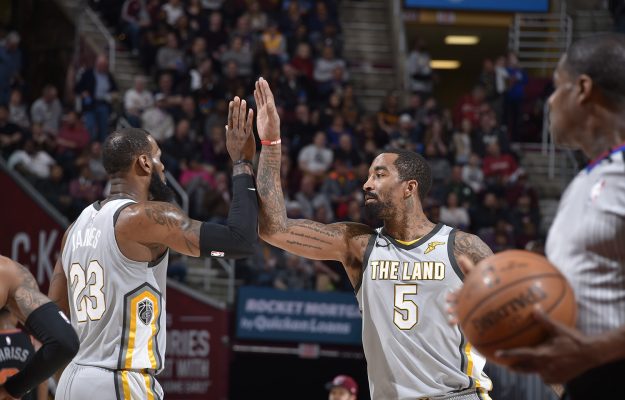 (Cleveland, OH) — A 32-7 second-quarter run helped shake off some early struggles for the Cleveland Cavaliers as they routed the Phoenix Suns by a score of 120-95 at Quicken Loans Arena on Friday night. The Suns had entered the game with a 19-53 record, tied for the worst record in the NBA with the Memphis Grizzlies.

The Cavaliers had trailed 30-23 just 22 seconds into the second quarter when the onslaught began and ended nearly seven minutes later with the home team up by a 55-37 score. Doing the bulk of the damage was the trio of Jordan Clarkson with 11, while Kevin Love and J.R. Smith added eight points each.

A key to the surge were the five 3-pointers unleashed by the Cavs, who shot a relatively modest 54 percent (13-of-24) during the quarter, yet outscored their opponents 39-18 during those 12 minutes of action. The Suns struggled with their shooting from the field, ending the second period with a weak 33 percent (7-of-21) success rate.

“When we play defense, everything else is easy,” Smith said.

When play resumed after the break, Phoenix made an effort to get back into the contest by scoring six of the first eight points to make it a 64-51 game with 10:45 left. Over the next nine minutes, Cleveland ended any hopes of a comeback by letting loose with a 29-12 run that began with 12 unanswered points and gave it a 30-point advantage at 93-63. Some sloppy play in the final 1:45 of the period allowed the Suns to score the final eight points to make it a 93-71 contest.

The final quarter saw the Cavaliers maintain control, with the reserves helping to close out the contest during garbage time. Cleveland ended up taking its largest lead of the game at 113-82 following a Smith 3-pointer with 4:22 left.

A positive sign during the game were the returns, albeit on minutes restrictions, of three Cavaliers who had been sidelined by injuries: Tristan Thompson, Larry Nance Jr. and Rodney Hood.

“We’ve got a bunch of guys slowly trickling back in from injuries and health issues, so just kind of incorporating the new guys and catching a nice rhythm going into the playoffs,” said Nance.

The recurrence of Hood’s back injury had kept him out the past three games:

“I don’t know if his back is still sore, but I knew he would be rusty,” Cavs assistant coach Larry Drew said of Hood after the game. “It’s gonna take him a few games to get back into his rhythm.”

LeBron James led all scorers, finishing with 27 points and narrowly missing a double-double with nine assists, adding six rebounds. Love was the only other starter to score in double-figures, notching 20 and grabbing six boards off the glass.

“We’re just trying to find a way, no matter what’s going on,” James said. “I’m staying even keel because we might have a horrible week next week. That’s why I’m not getting too high about what we’ve accomplished this week.”

Nance made a strong comeback in 22 minutes, collecting a double-double with 15 points and 10 rebounds, while Thompson also hauled down 10 rebounds. Clarkson finished with 13 points, Smith ended his evening with 11, and Hood’s return delivered nine points to the Cavs’ cause.

“Guys are making the right plays,” Nance said about the team’s recent success. “We’ve been having mismatched lineups, so it just boils down to guys doing the right thing and playing together.”

One of the few areas where Cleveland struggled was on 3-pointers, making just 8-of-29 (28 percent) for the night.

“We had a lot of good looks, but we just didn’t knock them down,” Love said. “But we were able to take advantage of the mismatches during the game.”

Drew spoke about the challenges ahead as the Cavs look to close the regular season on a strong note:

“I think 10 games is enough time,” Drew said. “It helps you establish a rotation, allows the guys to get a feel for one another and what what we’re going to do from an offensive and defensive standpoint.”

The Cavaliers now hit the road for a three-game road trip, beginning with a Sunday afternoon clash against the Brooklyn Nets. That contest gets underway just after 1 p.m. ET.