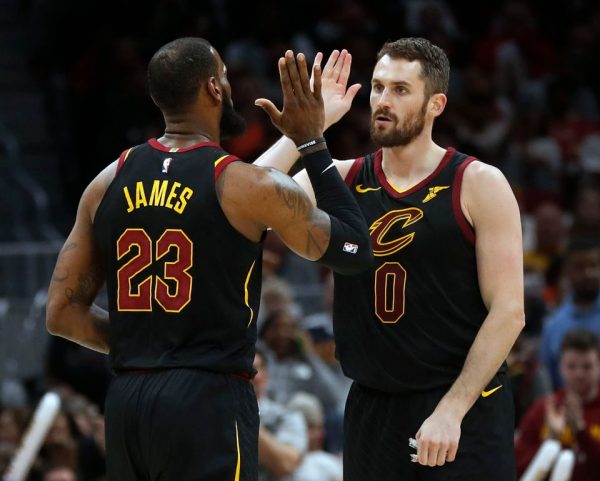 (Cleveland, OH) — Using the 16th triple-double of the season from LeBron James as their launching point, the Cleveland Cavaliers notched their second straight victory by knocking off the Milwaukee Bucks at Quicken Loans Arena on Monday night by a score of 124-117.

For much of the fourth, the Cavaliers were able to maintain a double-digit lead, though the Bucks used a late charge to make it a two-possession game at 119-113 with 40.1 seconds to go. That would be as close as Milwaukee would get, with the remaining time resulting in Cleveland putting the game away by drilling five free throws.

The contest was the first game for the Cavaliers at home since their return from a six-game road trip and also marked the return of forward Kevin Love, who had missed nearly two months because of a fractured left hand.

“It felt good to be out there with those guys,” Love said of his return. “I thought a lot of guys contributed and Bron was incredible.”

While Cleveland welcomed back Love, they were without head coach Tyronn Lue, who the team announced earlier on Monday was taking a health-related leave of absence. Assistant coach Larry Drew took Lue’s place on the bench, matched up against his former team.

“I was real happy, first of all, to get him back,” Drew said. “I thought he gave us a tremendous lift, not only the fact that he made some shots, but I thought he was pretty active defensively.”

James led all scorers with 40 points, while grabbing 12 rebounds and dishing 10 assists, while Love played 24 minutes and finished the night with 18 points and seven rebounds. In addition, Love managed to nail four 3-pointers and hand out four assists.

Speaking of what Love’s return gives the team, James spoke about his teammate’s unique talents:

“His ability to stretch the floor allows us to force other big men out of the paint,” James said.

Four other players of the still short-handed squad managed to score in double figures, paced by Jordan Clarkson‘s 17 points off the bench. Another reserve, center Ante Zizic put up solid numbers by scoring 13 and hauling down six boards. Rounding out the quartet were starters Jeff Green and Kyle Korver, who scored 14 and 12, respectively.

“I thought Jordan was playing well, being aggressive, so we decided to stay with him,” Drew said.

“What Z has done is show that he belongs on the floor,” Drew said. “I don’t know what’s going to happen when Tristan [Thompson] returns, but it’s a good problem to have.”

The opening quarter saw neither team able to make much of a move after the Bucks had jumped out to an early 7-2 lead. Another five-point Milwaukee lead at 14-9 then led to a 13-4 surge by Cleveland that gave the hosts a 22-18 advantage with just over three minutes left in the period. By the time the horn sounded, the Cavs held a 26-25 lead.

“We were locked in,” Clarkson said about the team’s motivation. “We wanted to get this win and we had Kev (Love) back.”

After taking a seven-point lead into intermission, the Cavs were able to maintain that advantage throughout the third quarter, though the Bucks twice sliced it to a two-point margin. Despite outshooting the Cavaliers from the field during the period, the Bucks found themselves dominated on the glass in the quarter by a commanding 13-3 lead, which helped the Cavs take a 93-85 advantage into the last period.

“I have to stay committed to my regimen,” James said about his continued strong play. “I’m not going to make shots every night, but I can always figure out how to be a threat on the floor.”

The Cavaliers will stay at home on Wednesday night for a formidable matchup against the top team in the Eastern Conference, the Toronto Raptors. Tipoff for that game will be just after 7 p.m.