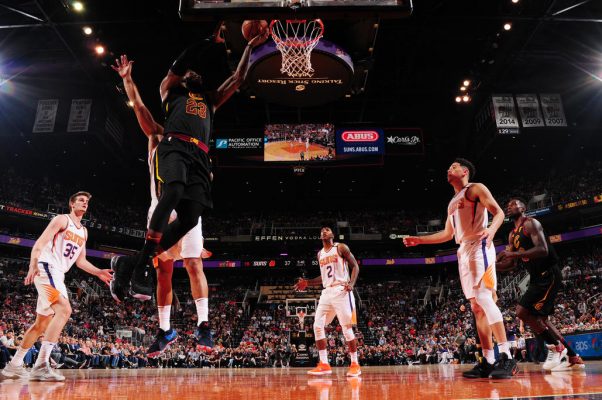 (Phoenix, AZ) — Leading from start to finish and powered by a triple-double from LeBron James, the Cleveland Cavaliers had an easy time in the Valley of the Sun as they knocked off the Phoenix Suns, 129-107, at Talking Stick Resort Arena on Tuesday night. The win put an end to the Cavaliers’ two-game losing streak.

One of the ways that the Cavs managed to dominate was in their aggressiveness in getting to the free-throw line, ending their night with a 26-for-30 (87 percent) performance at the charity stripe. Of course, facing the team with the second-worst record in the NBA was also beneficial, especially in light of the Cavaliers’ recent struggles.

“Just playing well early, we set the tone and played well on defense,” Cavs head coach Tyronn Lue said after the game. “The guys did a good job of following the game plan.”

James finished with 28 points, 13 rebounds and 11 assists to collect his 14th triple-double of the season, while also getting to the free-throw line frequently by connecting on 13-of-15 in that area.

“It says I’m getting better with age, like fine wine,” James said when asked what his all-around performance says about him.

Meanwhile, Kyle Korver replaced J.R. Smith in the starting lineup, with both players thriving in the new configuration. Korver hit for 22 points, including five long-range bombs, while Smith delivered 14 to the Cleveland offensive cause.

“We always work well together, ever since he got here,” James said of Korver’s ability to thrive in a starting role.

The Cavaliers took control of the game from the outset, jumping out to a 13-2 advantage just three minutes into the contest. They’d continue to boost the lead during the period before ending it with a commanding 20-point lead at 38-18. Their 55 percent shooting from the field for the quarter was in contrast to the Suns’ woeful 26 percent effort in that department.

“Even though they’ve (Phoenix) been struggling, we know they get off to a fast start at home,” James said of the Cavs’ early defensive effort. “It started with our attention to detail. We were in tune with the game plan.”

The two teams reversed shooting roles in the second quarter, with Phoenix matching that 55 percent first-quarter effort of Cleveland, which only managed to hit on 36 percent of its attempts in that area in the second. Still, the Cavaliers managed to maintain a large enough cushion throughout the period to head into halftime leading 68-52.

“It was a good game for us since it’s been a while since we’ve had a good flow,” Korver said. “I had a lot of good looks. We just have to keep building and working on our chemistry.”

Any thoughts the Suns had of mounting a comeback were dashed by a 24-14 start by the Cavaliers that gave them a 26-point lead, their largest of the game, at 92-66. Some key reasons for the Cavs’ ability to put the game away were their five 3-pointers and eight assists during the period, which ended with the Cavaliers holding a 102-80 lead.

That comfortable margin allowed for liberal use of the depleted bench in the fourth quarter. That group managed to maintain Cleveland’s healthy advantage and also give the starters some rest.

“The way we defended tonight and knocked down shots leads to nights like this,” Hill said.

On Thursday, the Cavaliers’ six-game road trip continues with a trip to face the Portland Trail Blazers. That contest will tip off just after 10 p.m. ET.