Cleveland Cavaliers vs. Washington Wizards Game Recap: Back to the Drawing Board 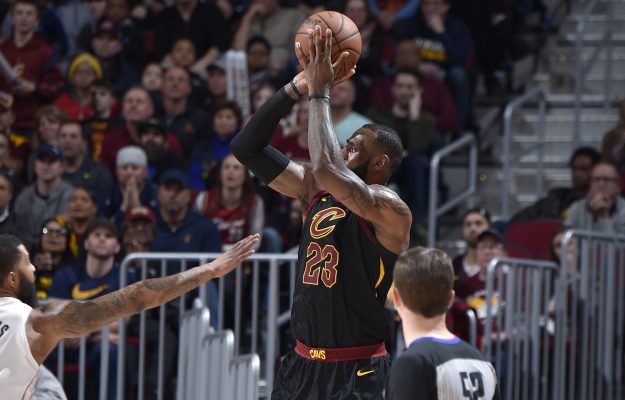 (Cleveland, OH) — Despite a furious comeback in the final four minutes of play, defensive woes over the final 29 minutes of action sent the Cleveland Cavaliers to a 110-103 loss to the Washington Wizards at Quicken Loans Arena on Thursday night. The defeat ended the Cavs’ four-game winning streak as they resumed play after the nine-day All-Star break.

With 9:42 left in the game, the Cavaliers had held a slim 89-88 lead, but a 16-4 run by the Wizards proceeded to give the visitors a 104-93 advantage with just 3:44 to go. LeBron James served as the Cavs’ entire offense over that final stretch of nearly 10 minutes, twice getting the Cavs to within three points of tying the game. He finished with 32 points on the night, adding nine rebounds and eight assists while also hitting on 13-of-18 from the field.

“We got some really, really good looks tonight. We played hard,” James said. “But I think the legs, being off for nine days, kind of got to us, especially after the first quarter.”

However, it was the breakdowns on defense that proved to be the most deadly flaw for Cleveland, which had held Washington to 38 percent shooting (15-of-39) from the field during the first 19 minutes of action. From that point, the Wizards hit at a 55 percent clip in that area and got hot from deep after hitting just 1-of-8 on 3-pointers to start out. They then knocked down 50 percent (11-of-22) in that department for the rest of the contest.

“They went small and it really gave us problems,” Cavs head coach Tyronn Lue said after the game. “It put us in scramble mode.”

Only two other Cavaliers managed to score in double figures besides James: J.R. Smith, who contributed 15 points, and Tristan Thompson, who scored 12 and came close to a double-double with nine boards. Newcomer George Hill endured a rough shooting night, hitting just 2-of-10 from the field and scoring only six points.

Another one of the team’s newcomers, guard Jordan Clarkson, scored nine points and was asked after the game about playing at Quicken Loans in his first home game:

“It felt good, a lot of energy,” Clarkson said. “They show a lot of love, it’ll be fun to play here again.”

Equally impressed with the home fans was Larry Nance Jr., who will soon be wearing his father’s retired No. 22 Cavaliers number:

“I heard the crowd when I checked in,” Nance said. “It was one of the coolest moments of my life.”

The Cavs raced out to a quick 15-6 lead to start the game, and while the Wizards quickly answered with seven unanswered points, the Cavaliers countered with nine straight of their own. Many of Cleveland’s field goals in the period were in the paint or nearby, helping to explain its 61 percent shooting percentage from the field. Meanwhile, its defense held Washington to just 37 percent in that same category and gave it a 31-22 lead by the end of the quarter.

That smooth flow continued for the Cavaliers nearly seven minutes into the second period, helping them take a 45-33 lead at the 5:19 mark. That was when momentum drastically shifted, with the Wizards embarking on a 24-9 run to head into halftime with a 57-54 advantage. Their key weapon during that surge came on 3-pointers, with the Wizards connecting five times while hitting 58 percent from the field for the quarter, though five Cleveland turnovers also aided their cause.

“Biggest part [of the Cavaliers’ defensive problems] was [Kelly] Oubre,” Lue said of the Wizards reserve who scored 17 points and grabbed five rebounds. “He really hurt us off the bench and got them going.”

Continued issues on defense, especially in stopping the fluid ball movement of the Wizards, kept the Cavaliers from making any headway during the third quarter. After Washington took a 69-64 lead, Cleveland was able to trade leads before heading into the final quarter trailing by an 82-79 score.

Despite the loss, James remained positive:

“It’s going to be very challenging,” James said of the Cavs’ need to help their new players adapt down the stretch. “But we’re going to be playing every other days, so we’ll be able to learn on the floor. It’s up to us to fast track that learning.”

The Cavaliers have a quick turnaround, playing tomorrow night on the road against the Memphis Grizzlies in a game that will tip off just after 8 p.m.