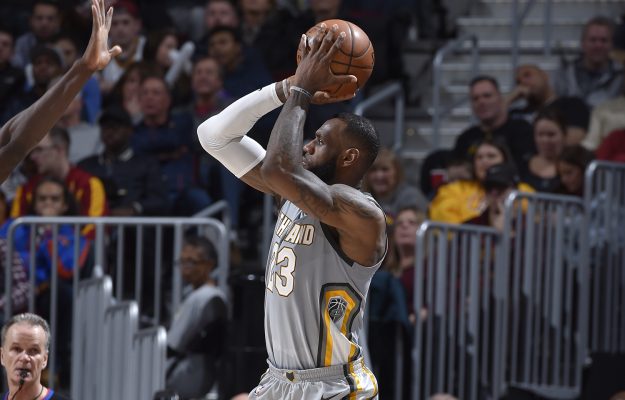 (Cleveland, OH) — LeBron James’ fadeaway jumper at the buzzer in overtime helped the Cleveland Cavaliers put an end to their two-game losing streak as they outlasted the Minnesota Timberwolves by a score of 140-138 at Quicken Loans Arena on Wednesday night.

James, who finished with a triple-double on the night, was the definition of clutch in the game’s final minute. With 24 seconds left in the overtime, he tied the game on a driving layup and then swatted away Jimmy Butler‘s shot in the closing seconds.

“I just tried to time it and use my athleticism,” James said. “I tried not to knock it out of bounds.”

J.R Smith grabbed the ball and called a timeout with just one second remaining, with Jeff Green‘s inbound pass to James then delivering the game-winner.

“I was happy Swish (Smith) was able to get that timeout,” James said. “Once I caught it, I trusted everything I’d put into my career to prepare for that shot.”

Dwyane Wade sat out the game on the second night of a back-to-back, which meant that Green was responsible for getting the ball in for that final play.

“All of our inbounds passes at the end of the game are either from Jeff or D. Wade,” Cavs head coach Tyronn Lue said. “Jeff made a great pass.”

Green himself expressed humility about his role in the game-winner:

“I was just trying not to turn the ball over,” Green said. “I just threw it to an open spot and he hit the shot.”

The overtime had been set up after a whiplash-like fourth quarter, which saw each team take turns trying to gain momentum. The Timberwolves ran off the first six points of the period to take a 105-101 lead, which then sparked a 23-11 push by the Cavs to take 124-116 lead with 3:57 left in regulation.

Minnesota then answered with eight straight points, followed by two more ties that deadlocked the score at 129. James’ attempt to win it in the closing seconds missed to extend the game.

Those changing fortunes for both teams were evident all game, with 34 lead changes and 16 ties. Neither team led by more than eight points during the contest. Cleveland ended the game shooting 59 percent from the field, while Minnesota was right behind them at 58 percent.

James led all scorers with 37 points, 15 assists and 10 rebounds. The latter total helped him reach another record in his storied career as he became the Cavaliers’ all-time leading rebounder.

Lue spoke of the importance of James in that final stretch:

“He made three big plays for us,” Lue said. “He was great and the way we’ve been playing lately, we needed him to be great.”

The Cavs’ other four starters also scored in double figures, led by Smith’s 20 and Tristan Thompson with 17. Both Isaiah Thomas and Green ended the night with 13 points, while Jae Crowder‘s 10 points were topped by Kyle Korver‘s 14 off the bench.

The Cavs defense had problems all night with the Timberwolves’ duo of Butler (35) and Karl-Anthony Towns (30), who combined for 65 points.

“Even when we played good defense, they were making shots,” Lue said. “We brought our physicality and I thought we did some good things.”

The Cavaliers continue their busy schedule leading into the All-Star break as they travel to face the Atlanta Hawks on Friday night. Tipoff for that contest will be just after 7:30 p.m. ET.