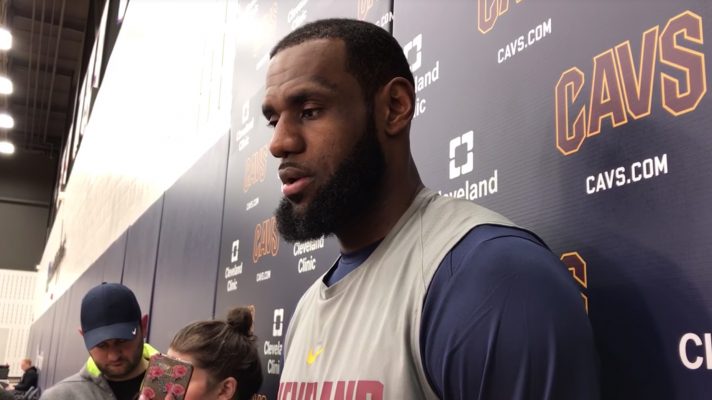 The political activism that Cleveland Cavaliers forward LeBron James has shown in recent years has encompassed a variety of topics, some of them being of controversial nature. One of the more frequent targets of his criticism on issues has been President Donald Trump, with James taking time on Martin Luther King Jr. Day to discuss what he feels is the negative impact of Trump’s presidency on American society.

James talked following the Cavaliers’ morning shootaround on Monday, and left no doubt of his animosity toward Trump, whose name he even refused to say:

“The state of racism will never die, but what we cannot do is allow it to conquer us as people. We can’t allow it to divide us,” James said. “The guy in control has given people and racism, and negative racism, an opportunity to be out and outspoken without fear. And that’s the fearful thing for us because it’s with you, and it’s around every day, but he’s allowed people to come out and just feel confident about doing negative things.

“We can’t allow that to stop us from continuing to be together and preach the right word of livin’ and lovin’ and laughin’ and things of that nature. Because would we want to live anywhere else? I don’t think so. We love this place.”

James also preached unity, though he directed more of his ire at Trump:

“We are in a difficult state right now as Americans as well with the leader of our country,” he said. “But no matter the religion, no matter the shapes and sizes, we all have to continue to come together and shine a brighter light on … I don’t want to use the word stupidity, but that’s basically what it comes down to.

“And because we’ve built such an incredible country and for us to be able to live free lives and be able to work and work together, no matter the color of skin tone or things of that nature. Or religion. And we have to continue that and that date, I put it on my shoes because it always reminds me of our conversation. The conversation of how to continue to keep people involved. And giving the youth an opportunity to be as creative and as aware as they can be.”

James was also asked about what King would say about him if he were around today:

“Well I hope I could make him proud or made him proud. Just taking what he was able to give to us and give us that type of empowerment, give us that type of strength to be able to go out and talk about things that really matter,” James said. “Be able to live for something that’s more than you as an individual. So hopefully I would be one of those guys that made him proud. Hopefully I’m, making him proud still with him looking down on us.”

Despite being born nearly 17 years after King’s 1968 assassination, James has taken the time to learn more about the civil rights leader. That includes visiting the Lorraine Motel, the site of the National Civil Rights Museum in Memphis, where King was killed:

“To be able to be there at that hotel, at that site, where he was assassinated was a very eerie feeling and a very powerful feeling at the same time to be able to … be a part of the movement,” James said. “You kind of felt that. I’m looking forward to the opportunity where I can take my kids there and they can completely understand what they’re actually witnessing.”

James and the Cavaliers will host the Golden State Warriors at Quicken Loans Arena on Monday night.