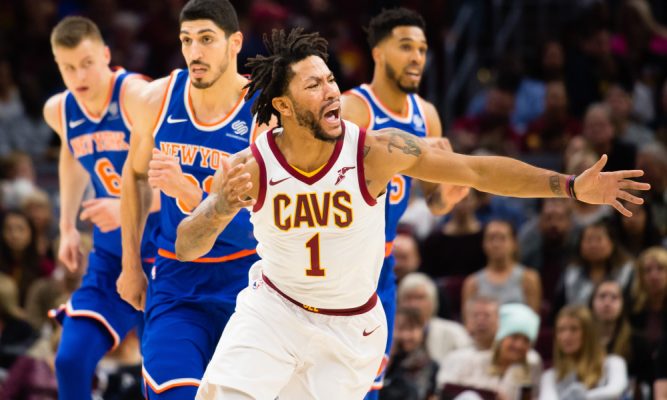 The Cleveland Cavaliers command one of the best offenses the NBA has to offer, but they are in the bottom five on the other end of the court. That may be why they are looking to potentially acquire a defensive-minded player as the NBA’s Feb. 8 trade deadline approaches, according to Sam Amico of AmicoHoops.net:

“The Cleveland Cavaliers know they need help defensively and they know that help isn’t likely to come from within.

“So that naturally puts them on the lookout for top-flight defenders as the Feb. 8 trade deadline closes in.”

The Cavs reportedly “have an interest” in Los Angeles Clippers center DeAndre Jordan. To make matters more interesting, it seems the Clippers are willing to have the conversation.

“It’s become pretty clear the Clippers are open to moving Jordan, but it’s also evident they aren’t going to just give him away for nothing,” Amico wrote. “They want a draft pick, and if you’re talking Cavs, you’d better believe the Clippers would want the Cavs’ first-rounder from the Brooklyn Nets.”

Amico continued to explain that while trading the Nets pick seemed out of the question earlier in the season, that may not be the case anymore. The Nets currently sit at a 15-24 record. They are a long shot to qualify for the playoffs this season, but they may not have great odds at a lottery pick either. That could mean that the value of the pick has been reduced for the Cavs now that it likely won’t earn them a surefire star. It still has value around the league, though, and seems to be a key piece of any trade that would send Jordan to Cleveland.

The only question that remains is whether or not the Cavs deem Jordan to be worth the draft pick the Clippers reportedly covet.

“Granted, the Cavs don’t want to trade the pick — unless they think moving it will bring back a player that moves them considerably closer to a championship,” Amico wrote. “Jordan, 29, could be such a player. He is a 6-foot-11 rebounding and shot-blocking machine, finishing off passes with thunderous dunks.”

Jordan is having one of his better years statistically so far this season. He is averaging 11.6 points and 15.1 rebounds per game, and still possesses the skill and speed to serve as a team’s defensive anchor. While he has always been a liability from the free-throw line, he has improved in that area as well. He had only topped 50 percent shooting from the line once throughout his career before this season, but is currently shooting 60.6 percent, marking a noticeable improvement.

The rebounding big man isn’t the Cavs’ only target before the deadline, however.

“So a lot could still happen, with other players and perhaps teams getting thrown into the mix,” Amico wrote. “Or nothing at all could happen and the Cavs could target lesser names, at a lesser cost, who may help just as much or more.

“The key is to improve the D. Regardless of how the Cavs go about it or who they pursue, that is the mission before the trade deadline passes them by.”

If this previous offseason was of any indication, the Cavs are willing to make moves to improve their chances at bringing home another NBA championship. While Jordan may not be wearing the Wine and Gold by the time the deadline arrives, it seems fans should expect to see some new faces in Cleveland.