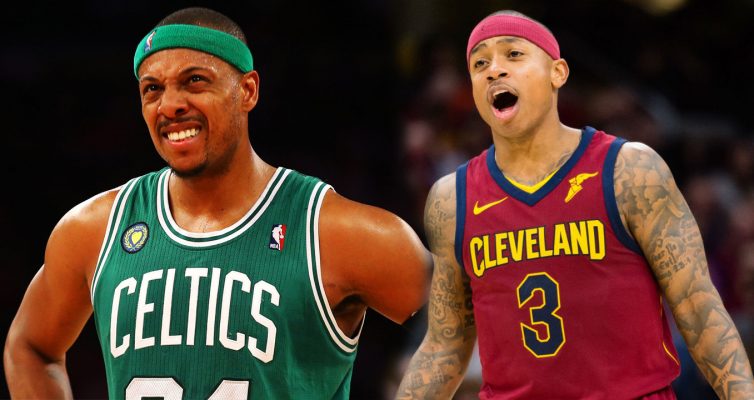 The ego of a professional athlete, even after he finishes playing, can often remain fragile, with the latest example being former Boston Celtics forward Paul Pierce. The future Hall of Famer expressed annoyance on Thursday over the current plan of the Celtics to show a highlight film of Cleveland Cavaliers point guard Isaiah Thomas prior to the start of the Cavaliers’ return matchup against the Celtics in Boston on Feb. 11.

Chris Forsberg of ESPN.com noted that earlier in the day, Celtics general manager Danny Ainge had indicated on a Boston radio program that the Thomas video would be shown that night. The reason for the move was because Thomas, who was traded in August after nearly three years with the Celtics, didn’t play in the Cavaliers’ Wednesday night loss at TD Garden.

“I think Paul said it best: He’s going to be the appetizer, the main course and the dessert. I thought that was pretty funny,” Ainge said. “I think it won’t interfere with Paul. And Paul understands that, everybody understands that. It’ll be a great game and a great moment. And Isaiah deserves it, in our minds.

Pierce appeared later in the day on the ESPN program “The Jump” and expressed some irritation that his Celtics number (34) is scheduled to be retired the same evening as the Thomas video:

“I’m not saying Isaiah shouldn’t get a tribute video … but on Feb. 11, the night I get my jersey retired, I’m not sure I want to look up at the JumboTron and see Isaiah highlights,’ Pierce said.

Pierce compared the situation to the recent retirement of Kobe’s Bryant‘s numbers with the Los Angeles Lakers, which he attended and where the team showed highlights of Bryant’s legendary career throughout the game:

“I enjoyed watching that throughout the game,” Pierce said. “Hopefully the Boston Celtics will do that for me. I’m not sure I want to see an Isaiah video that night.

Thomas tried to explain his side of the situation while also trying to downplay the controversy:

“That’s Pierce’s night. But, like, the video tribute ain’t the whole night,” Thomas said. “I just wanted my family to be here to see it. That’s what it came down to. I wanted to be able to play. And I wanted my family to experience the love and appreciation this city and this organization is going to give me on that night. And when my representatives reached out to these guys, [the Celtics] were all for it. They agreed on it.

“I don’t know why [some people are] so mad about it. I’m not taking nothing from Paul Pierce. He did 15 years here so there’s nothing that I can take from him. But if they choose to do it that night, that would be great and I would be honored. And my family and friends can see how much they appreciated me here.”

The Cavaliers themselves are hoping for a better final result after watching the Celtics limit them to 35 percent shooting from the field. The loss sent the Cavs to their fifth loss in the last seven games.