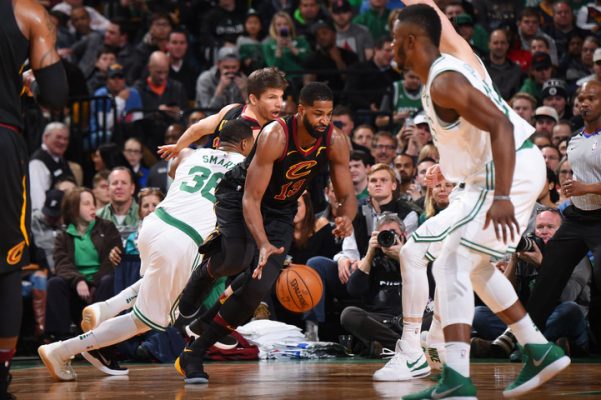 (Boston, MA) — Stymied by one of the NBA’s top defenses throughout the game, the Cleveland Cavaliers fell to the Boston Celtics by a score of 102-88 at TD Garden on Wednesday night. The Celtics came into the contest with a strong pedigree on defense and put that on display by limiting the Cavaliers to just 35 percent (31-of-89) shooting from the field and 25 percent (8-of-32) on 3-pointers.

LeBron James led the Cavs with 19 points, seven rebounds and six assists, with J.R. Smith the only other Cavalier starter to score in double figures with 10 points, adding three rebounds. Kyle Korver and Jeff Green scored 15 and 13, respectively, off the bench, while Tristan Thompson came close to a double-double with eight points and 10 boards.

“We had some good looks, but they had a good defensive game plan and they executed,” James said. “They played at a high level tonight and they’ve been playing well at home.”

Kevin Love endured a miserable night, shooting 1-of-11 from the field, including four misses from long-range. He then left the game in the second half due to an ankle injury that he had suffered during the second quarter. After the game, he was asked about whether the injury would keep him sidelined.

One indication of just how much the Cavaliers’ starting unit struggled could be seen from the fact that the team’s bench outscored it 45-43.

“Defensively, we did some good things, but their bench hurt us,” Cavs head coach Tyronn Lue said after the game. “Offensively, we missed some layups and easy shots.”

During the first period, the Cavs hit just 29 percent (7-of-24) from the field and connected just once on eight long-range attempts. Cleveland managed to hold a 9-8 lead with seven minutes remaining in the first, but then watched Boston outscore them 24-12 over the rest of the period to hold a 32-21 lead.

The Cavaliers’ shooting from the field improved to 45 percent in the second quarter, but they still had problems slicing into that double-digit deficit. They twice got the margin to five points, only to see the Celtics build it back up, eventually to a 55-47 halftime lead. That deficit might have been steeper had Korver not hit on four 3-pointers during the period.

“We had some good stuff going in the second quarter,” Korver said. “Overall, our energy was a little flat. It’s just one of those games.”

Love scored his first basket of the game to start the second half, but the Cavs then watched the Celtics go on a 20-6 run to take their largest lead up that point at 75-55. That was accomplished through torrid shooting by Boston (7-of-10 during that stretch) and continued struggles from the field by Cleveland.

“Offensively, we got some good looks, but they just didn’t fall for us,” Love said.

The Celtics did cool off considerably over the rest of the period, hitting just 3-of-14 from the field, which helped whittle the margin to as low as 11 points. However, the Cavaliers ended the third quarter by connecting on just 30 percent (7-of-23) from the field over those 12 minutes and found themselves trailing 81-68 when the period ended.

“It just feels like we’re a little stagnant on both ends,” Korver said. “The ball wasn’t popping tonight like it usually is.”

A 19-9 run over the first 7:07 of the final stanza by the Celtics put the game away and gave them their largest lead at 100-77. Once again, shots not falling were the culprit for the Cavs, who hit just 36 percent in the quarter.

The Cavaliers will remain on the road for the next outing, a Saturday night matchup against the Orlando Magic. Tipoff for that game will be just after 7 p.m. ET.

“They’re playing well right now, so hats off to them,” Lue said.