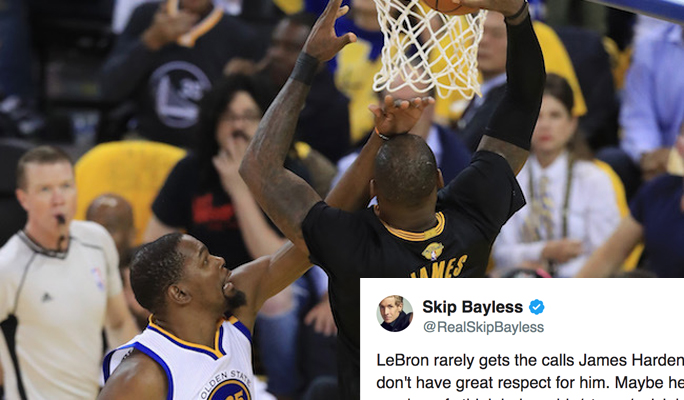 The friction between FS1 media personality Skip Bayless and Cleveland Cavaliers forward LeBron James has largely been the byproduct of Bayless’ countless criticisms of the 15-year veteran. However, it appears that a Bayless tweet from Tuesday took issue with NBA referees not giving James the benefit of the doubt when it comes to foul calls, comparing his situation to that of James Harden of the Houston Rockets.

LeBron rarely gets the calls James Harden regularly does. Refs just don't have great respect for him. Maybe he complains too much. Or maybe refs think he's so big/strong/quick he doesn't need their help.

One clear indication of the lack of fouls called on James’ defenders this season can be seen in his free-throw attempts per game. Entering Tuesday night’s action, James was averaging just 5.9 free-throw attempts per game, compared to 7.2 per contest last season. That’s the second-lowest number of his career, with only his rookie number of 5.8 beneath it, hardly the level of respect a four-time MVP might ordinarily be accorded.

Last week, James expressed his frustration about the situation, though there’s no indication that the problem is going away anytime soon.