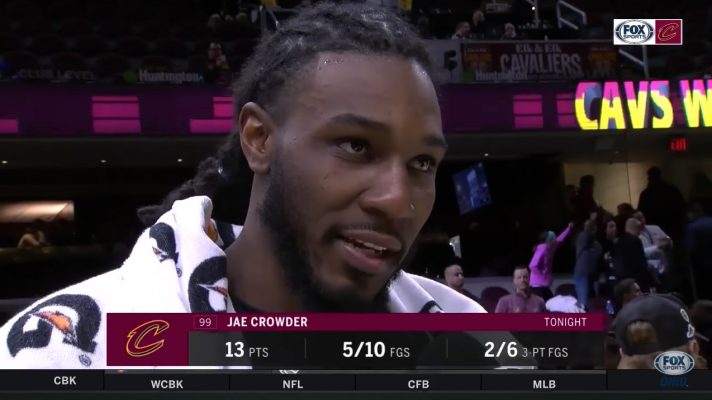 When Jae Crowder was sent to the Cleveland Cavaliers, many analysts saw him as the diamond in the rough within the blockbuster Kyrie Irving deal. At the onset of the season, though, Crowder struggled mightily and showed definite signs of growing pains with his new team.

While most of the recent news surrounding the Cavs have been about their recent winning streak and getting players back from injury, Crowder growing more comfortable with his new team is certainly something fans should celebrate as well.

Following Cleveland’s Tuesday night victory over the Atlanta Hawks, Crowder explained why he’s starting to feel more confident in his role with the Cavs.

“Being comfortable. Being confident. Having fun,” Crowder began. “Getting back to the basics. Winning takes care of all of the other stuff so once we get that going and keep winning we’ll be fine, we’ll get it together.”

Crowder started the month of the December with three lackluster performances, but in the following three games he’s averaged 10.3 points and 4.0 rebounds per game. He will look to build upon those numbers as he continues to gain experience with his new teammates.

Winning certainly does help a team come together. While on-court chemistry was a huge issue earlier in the season, there is no doubt that Crowder and the rest of the Cavs are having fun on the court once again. With Crowder’s former Celtics teammate Isaiah Thomas getting closer to his return everyday, basketball in Cleveland could be getting even more fun very soon.