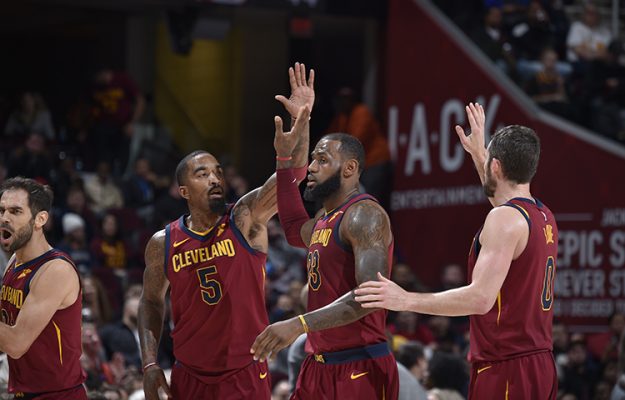 (Cleveland, OH) — Combining 20 3-pointers with double-doubles from LeBron James and Kevin Love, the Cleveland Cavaliers took control of their game in the second half against the Atlanta Hawks to come away with a 123-114 win Quicken Loans Arena on Tuesday night. The victory marks the 15th win in the Cavaliers’ last 16 contests.

“We’ve been here the last four years and this (3-pointers) has been our identity,” Love said after the game. “We weren’t doing that at the start of the year, but tonight, that felt like us.”

James ended the night with 25 points and a career-high 17 assists (among the Cavaliers’ 35 on the night), while Love contributed 17 points and 12 rebounds. Four other players finished in double figures, led by 19 from Kyle Korver and Jeff Green with 17. Jose Calderon added 14, while Jae Crowder tossed in 13 for the evening.

“I’m an efficient player. I’ve never been a volume shooter, that’s not my game,” James said. “I’ve been blessed to have the ability to see plays before they happen, it’s a gift.”

Korver drilled six 3-pointers, while Love and Calderon each ended the night with four in that category. In addition, J.R. Smith dished out eight assists, one short of his career-high. Tristan Thompson, who was on a minutes restriction in his return to the court, saw just six minutes of action, with no statistical numbers.

“At the start of the season things weren’t meshing for us,” Korver said. “But tonight, we were able to make a lot of shots.”

Meanwhile, the bench as a whole delivered another strong performance with 51 points spread among five players. Veteran Dwyane Wade sat out the game to rest a sore knee.

“We wanted to give him a six-minute burn in the first half,” Cavaliers head coach Tyronn Lue said about Thompson’s return after missing the last 19 game. “We knew he wasn’t going to play in the second half.”

Both teams were prolific during the opening quarter when it came to 3-pointers, with the Cavaliers hitting 9-of-13 from the field and the Hawks connecting on 6-of-11. Despite the Cavs shooting better from the field overall during the period, the two teams were deadlocked at 31 when the horn sounded to end the quarter.

Cleveland clamped down on defense during the second quarter, with Atlanta missing 8-of-10 from the field to start the period and shooting just 35 percent for those 12 minutes. The Cavaliers also improved on the offensive glass with four boards, and with a 14-6 run to close the quarter, they took a 62-48 lead into halftime.

Once play resumed, the Cavaliers continued to maintain their double-digit advantage, never letting the Hawks get any closer until the final five minutes of action. Aided by 58 percent shooting during the third quarter, the Cavs handed out nine assists in a row and led by as many as 20 before taking a 94-77 lead to end the period.

“It’s always been enjoyable for me to see my teammates reap the benefits of my passing,” James said.

After the Cavs opened up their biggest lead at 109-85 with 8:50 left, the Hawks managed to get the final deficit down to that nine-point margin. By that time, Lue had inserted all of his reserves into the contest.

“When we play with pace and get back in transition, it’s tough for teams to handle,” Lue said.

The Cavaliers have two more games on their homestand, with their next contest against the Los Angeles Lakers on Thursday night. That game will be nationally broadcast by TNT and tip off shortly after 8 p.m. ET.