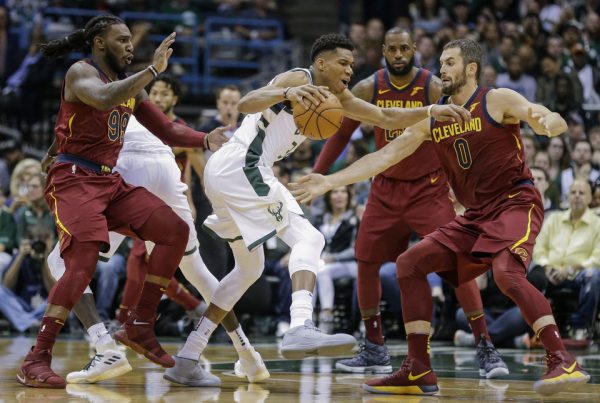 The Cleveland Cavaliers‘ slow start to the 2017-18 NBA season was due to a number of problems connected to the team, with poor defense largely seen as the biggest flaw. However, the Cavaliers are currently in the midst of a five-game winning streak, with LeBron James stating that consistency with respect to the game plan is the chief reason for what’s been an improved defense.

Joe Vardon of Cleveland.com quoted James, who spoke during the team’s shootaround on Wednesday morning:

“A game plan that’s been consistent over the last few games and we stuck to it,” James offered as an explanation for the five-game stretch that’s seen them rank eighth among the league’s 30 teams when it comes to defensive rating overall over that brief period.

Indicative of just how bad the team’s defense was prior to the winning streak relates to the fact that for the season, Cleveland still ranks last in that defensive rating category.

The change in approach is in contrast to the previous tendency to make adjustments during the game, according to James.

“We haven’t done much changing, we’ve stuck to our game plan and tried to execute that as close to 48 minutes as possible,” James said. “No matter if it’s been going well at times or whatever the case may be, we just stuck with it. Understand that we have to do that, get that down until we’re ready to kind of switch off to something else. I give that a lot of credit.”

A series of injuries during the early part of this season subsequently led to numerous lineups being trotted out by Cavs head coach Tyronn Lue. Vardon explained that simply going back to what worked during the team’s first two games helps explain a large part of the current success:

“[Kevin] Love is the center and [Jae] Crowder is again the power forward. The Cavs are back to blitzing and switching, and the defense is clicking.”

The Cavaliers will be looking for revenge on Wednesday night as they host the Brooklyn Nets, a team that took advantage of the Cavs’ defensive chaos on Oct. 25. During that Nets’ 112-107 victory, they connected on 17 3-pointers.