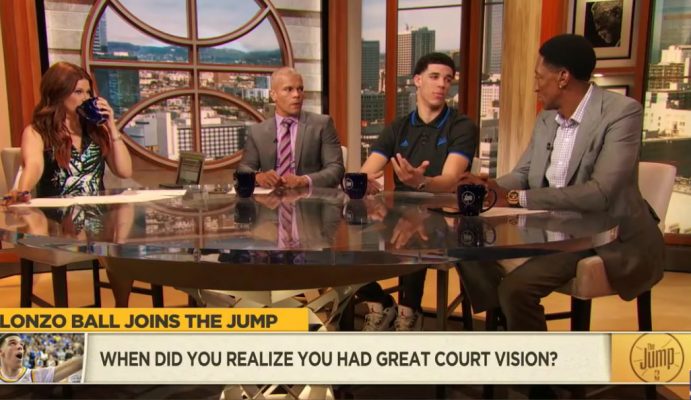 The drama over the past month involving Cleveland Cavaliers forward LeBron James and LaVar Ball, the father of three standout basketball players, has broadened enough to also include members of each family. In one of the most recent instances, James mocked the shooting style of Ball’s oldest son, Lonzo, who played for UCLA this past season.

During the latter half of the interview (at approximately the 12:20 mark), Pippen asks which player he compared himself with the most, with Ball responding:

“I get that question a lot and I don’t have an answer for it. But I have favorite players and my personal favorite player is LeBron James. He does everything on the floor.”

When then asked if he plays the same way as James or if he has the potential to play like the 14-year veteran, Ball commented:

“I try to, you know, how he gets points, assists, rebounds. He does what he can to help his team win.”

Nichols then showed the video of James mocking Ball’s shot and Ball attempted to defuse any controversy:

“I have no problem with it. If my favorite player is shooting like me, I’m going to smile.”

Ball will be entering June’s draft and will likely be selected as a lottery pick. Whatever team he’s playing with next season will have to face James and the Cavaliers at least twice, with plenty of eyes watching to see if James brings any extra motivation to the court in those contests.