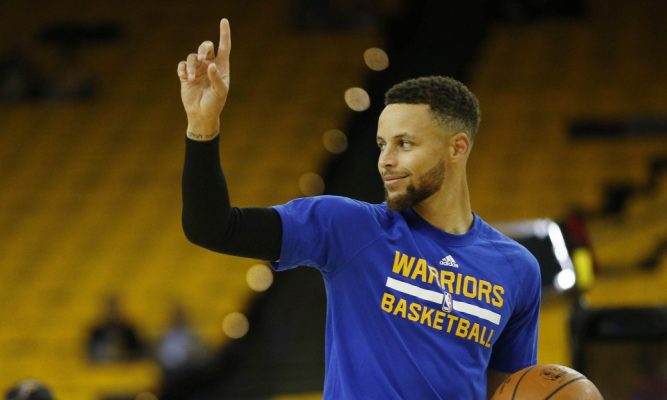 In the event the Cleveland Cavaliers needed any additional motivation over the remaining 67 games of the regular season, Golden State Warriors point guard Stephen Curry provided them with a push following the Warriors’ game against the Boston Celtics on Thursday night.

After that contest, Curry offered his opinion about the likelihood of the Warriors and Celtics meeting each other in the NBA Finals next June.

Stephen Curry on whether he’ll be back in Boston in June: “It’s looking very, very likely right now.”

Boston’s 92-88 victory over Golden State improved their season record to a league-best 14-2. The Celtics have lost just once since their opening night defeat to the Cavaliers, a contest that saw them also lose their key free agent acquisition Gordon Hayward for the year because of injury.

In comparison, the Warriors dropped to 11-4 on the year, but have won two of the last three NBA titles and entered this season as the favorites to do so again. In each of the last three Finals, their Eastern Conference opponent has been the Cavaliers.

Since winning their first two games of the campaign, the Cavs have struggled and currently have an 8-7 mark on the year. In addition to trying to blend in eight new members of the roster, Cavaliers head coach Tyronn Lue has had to deal with injuries that have sidelined point guards Isaiah Thomas and Derrick Rose, along with center Tristan Thompson.

Thomas is continuing to rehabilitate an injured hip he had suffered last spring, when he was still a member of the Celtics. In August, he was the key part of a trade package to the Cavaliers that sent the disgruntled Kyrie Irving to the Celtics. Thomas isn’t expected to play his first game for Cleveland until January.