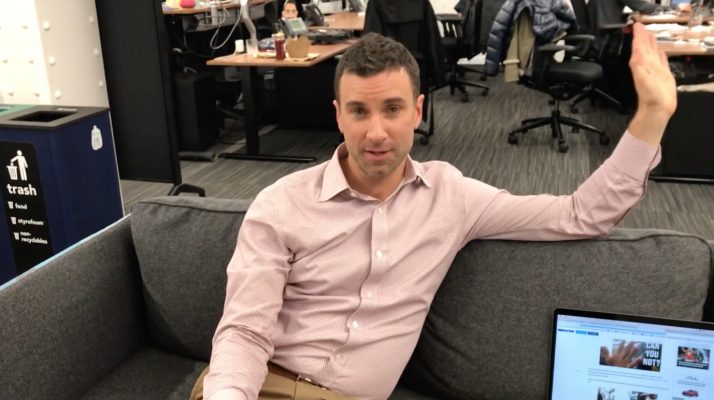 On Monday morning, LeBron James and the Cleveland Cavaliers made news by electing to use the New York subway system to get from a morning shootaround back to their hotel. During the video, James pointed his camera at a random subway-goer who was less than thrilled to be featured on a stranger’s video.

Hours later, the man who we now know is named James Michael Angelo, posted a video to Facebook regarding the awkward interaction.

Just for the record #canyounot

“Hi everybody it’s me James Michael Angelo, but I just want you to refer to me from here on out as, ‘Can you not.’ That’s my new name,” he said, referencing his reaction to seeing himself on James’ video. “So a couple of things. First of all, I don’t have a wife. Second of all, I had no idea who LeBron James was because I don’t watch football.”

The woman behind the camera then corrects him, letting Angelo know that James is in fact a basketball player:

“Oh, it’s basketball?” Angelo asks. “Okay so I don’t watch basketball either. LeBron, I just want you to know that I’m coming for you, okay?”

Angelo finishes the hilarious video by putting his hands up to the camera just as he did when James caught him on the subway.

Earlier in the day, Angelo had spoken with USA Today to give a more detailed version of his side of the story:

“I noticed a bunch of tall guys getting in the train, but I was listening to U2 and I didn’t want to be filmed.”

He continued by saying that James displayed less-than-ideal subway etiquette:

“To be honest with you, they got on and they completely squished me and he was really unaware of his space,” Angelo said.

Finally, he shared the real reason behind his reaction to James’ hilarious video:

“It was first thing in the morning,” he said. “I hadn’t finished my latte and I didn’t feel like being filmed. Plus, it’s not good lighting in the subway.”

This wasn’t the first time James has been criticized by a New Yorker leading up to the Cavs’ matchup against the New York Knicks. Hopefully James can silence the critics by bringing home a win on Monday night, though if you believe Angelo, he won’t be tuning in.