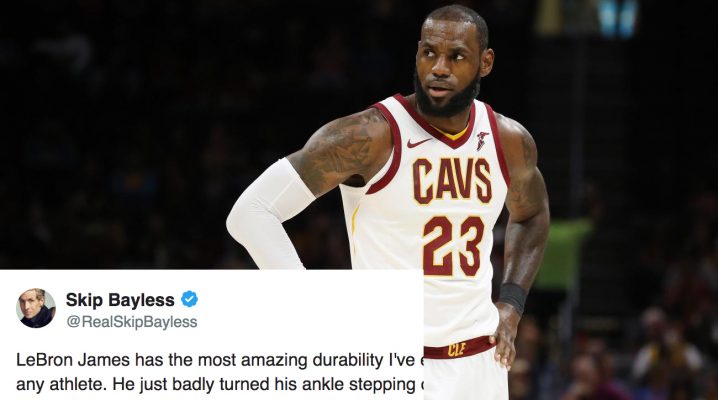 Fox Sports analyst Skip Bayless has been critical of LeBron James for quite some time. When James was able to return to the court after taking a nasty spill during Wednesday’s game against the Houston Rockets, however, Bayless couldn’t help but sing the four-time NBA MVP’s praises.

Shortly after James shook off the injury, Bayless took to Twitter to applaud James’ toughness.

LeBron James has the most amazing durability I've ever seen in any athlete. He just badly turned his ankle stepping on Ariza's foot. Walked it off. Played on. Other players would've been gone a month.

Just two days ago, Bayless had been critical of James on his show “Undisputed” for posting a cryptic “Arthur” meme post to Instagram.

“A lot of things LeBron does are cartoonish,” he said. “Because he’s got a lot of kid in him. He’s an overgrown child.”

Since then, it appears Bayless’ opinion on James has done a complete 180.

The Cavs are currently in a wire-to-wire contest with the Rockets and hopefully James’ injured ankle won’t get in the way of the them securing a badly needed victory against on the NBA’s best teams.