Cleveland Cavaliers vs. Atlanta Hawks Game Recap: Too Little Too Late, Yet Again 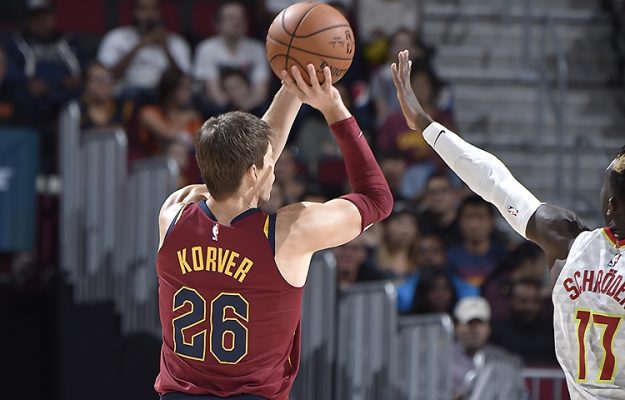 (Cleveland, OH) — Some late drama that nearly saw a miracle comeback came up short as the Cleveland Cavaliers dropped to 4-6 on the year following a 117-115 loss to the Atlanta Hawks at Quicken Loans Arena on Sunday afternoon.

The Hawks led 113-106 with 32.7 seconds left, then watched the Cavaliers furiously chop away at that margin the rest of the way. Two missed free throws by Atlanta with 12.1 seconds remaining gave the Cavaliers the chance to send the game into overtime or win it. Channing Frye went for the win on three-point attempt, but his shot missed and the Cavs were unable to get off another shot before the final horn sounded.

“Every night, we have to respect our opponent and have a sense of urgency,” Cavs head coach Tyronn Lue said during his postgame press conference. “Not the fourth quarter, not the last six minutes. If we don’t match their energy, we’re going to get beat.”

Prior to that rally, the poor defensive form that’s been a key aspect of their recent four-game losing streak put the Cavaliers in a continuous hole. All five members of the Hawks starting unit finished in double figures, in contrast to only LeBron James and Derrick Rose managing to break that threshold for the Cavaliers starters. James had a double-double with 26 points and 13 assists, adding five rebounds, while Rose contributed 10 points and three rebounds.

“No energy, the effort was pretty bad,” James said. “This has been going on for a while and we have to figure it out.”

It was Dwyane Wade‘s 25 points off the bench that paced the Cavs in scoring, with Kyle Korver also delivering 23 points in that same capacity. Wade scored 19 of his points during the first half and picked up a double-double of his own by grabbing 11 boards. Meanwhile, Korver tallied 19 of his points during the ill-fated fourth-quarter comeback effort.

“It’s just a little bit frustrating, I don’t know if we can put our finger on why,” Korver said about the Cavaliers’ slow starts. “Hopefully, one of these days this is going to turn around.”

Kevin Love struggled through his 18 minutes of action before leaving the game because of an illness. Love scored just four points on 1-of-6 from the field, grabbing four rebounds and collecting three steals.

“Against a team that’s 1-8, you have to take that confidence away early,” Wade said. “We have to start off better. You don’t want to be losing games like these.”

Early on, the Cavaliers had held an early 5-2 lead, then watched the Hawks put together a 25-6 run to take the first of two 16-point leads during the opening quarter. Once again, woeful defense during those first 12 minutes on the part of the Cavs saw the Hawks connect on 10 of their first 12 shots from the field, with smooth ball movement resulting in nine assists during that stretch for the visitors. Aggravating the problem was the Cavaliers’ poor shooting from the field during the first two quarters, hitting on just 14-of-47 from the field.

“When we’re not making shots, if affects our defense,” Lue said.

Cleveland managed to get the margin below double-digits by the time the first quarter came to a close at 37-28, then ran off a 16-6 run of their own to slice their deficit to a single point at 44-43 with 5:29 left in the half. However, even though both teams managed to hit on just 25 percent of their shots from the field in the second period, the Hawks scored 10 of the final 12 points before intermission to hold a 54-45 halftime advantage.

Without Wade’s contributions off the bench during that first half, the Cavs might have been on the wrong end of a blowout. The veteran guard nearly outscored the Cavs’ starting unit over the first half, notching 19 points, compared to the 20 produced by that quintet. His first eight points helped get the Cavaliers back in the game during the latter stages of the first period.

In that third quarter, the Hawks once again boosted their lead to 16, with neither team offering much in the way of defense. A number of baskets for Atlanta came on easy drives to the layup, but they also managed to hit on four 3-pointers during the period, with the Cavaliers finding themselves trailing 81-78 with just one quarter left. During that final period, the Cavaliers weren’t able to put any sort of run together until the final minute, with the defeat sending them to their fourth home loss in five contests.

The Cavaliers return to action on Tuesday night, when they host the Milwaukee Bucks in a game that’s set to tip off just after 7 p.m. ET. Following that game, the Cavs will play five of their next six games on the road, including a four-game road trip that starts on Thursday.