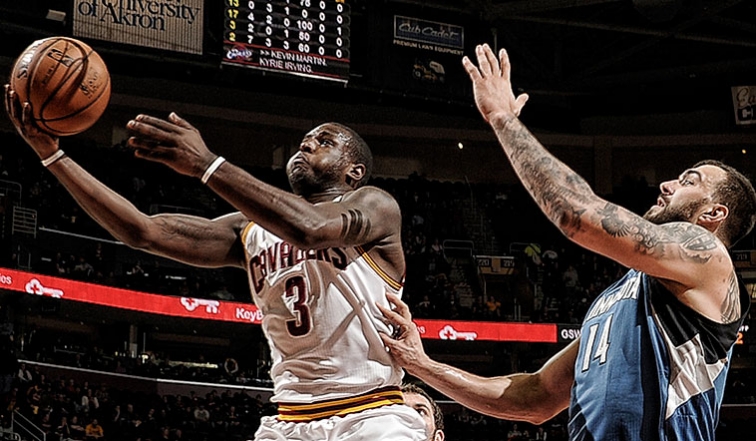 “I’m sure going back to Minnesota will be a lot more emotional, but here (in Cleveland) I think more than anything we’ll just step on the floor and try to get a win,” said Love about facing his former team. “It’s been a lot of fun traveling with these guys and getting to know my new teammates.”

When asked about Love after the Wolves’ practice on Monday, head coach Flip Saunders said he held “no grudges” against his former player. However, he believes the same can’t be said regarding Wolves fans in Minnesota.

“Minnesota people are pretty loyal,” said Saunders on Monday. “When you turn on Minnesota they don’t forgive you.”

“I’m just going to try to go in, be aggressive and play my game. There’s always motivation, I think that’s obvious. But I was there for like three days,” said Wiggins with a laugh to reporters after Monday’s practice regarding his return to Cleveland.

Another familiar face the Cavs will see is Timberwolves point guard Mo Williams, who spent two and a half seasons with Cleveland from 2008 until 2011.

Dion Waiters has had a handful of games in December where he’s been able to score at will and if he can score consistently off the bench for the Cavs, it will be huge in the long run.

“I just let it come to me. I take what they give me and try not to force it,” said Waiters regarding his recent play. “I just try to do other things besides score the ball. My approach to every game is to be locked in as far as being consistent and being aggressive at all times.”

Anderson Varejao will also look to build off one of his best performances of the season, in which he had 18 points (nine of 12 from the field) and seven rebounds in Cleveland’s 105-91 victory over the Memphis Grizzlies at Quicken Loans Arena on Sunday.

“I believe we are getting more comfortable playing with each other,” said Varejao on the win over the Grizzlies. “We know if we play like that every night, we are a pretty good team.”

1. Don’t Take the Timberwolves Lightly, Regardless of their 5-21 Record – The Cavaliers have had their share of bad stretches on offense and defense this season, and this would be a terrible game to be caught off guard. They simply can’t be looking ahead to the Christmas Day game when LeBron James makes his return to Miami in a showdown with his former team, the Heat.

2. Kyrie Irving Is Due for a Huge Offensive Game – Since dropping 37 points against the New York Knicks at Madison Garden on December 4, Irving has only scored at least 20 points once. Over the last two weeks, Irving is averaging only 14.5 points per game, noticeably below his 19.7 average for the season.

3. Contain Andrew Wiggins – The #1 pick in the 2014 draft will be very hungry to have a career night against the Cavs. Wiggins has struggled the past week though, not scoring in double figures the past three games.