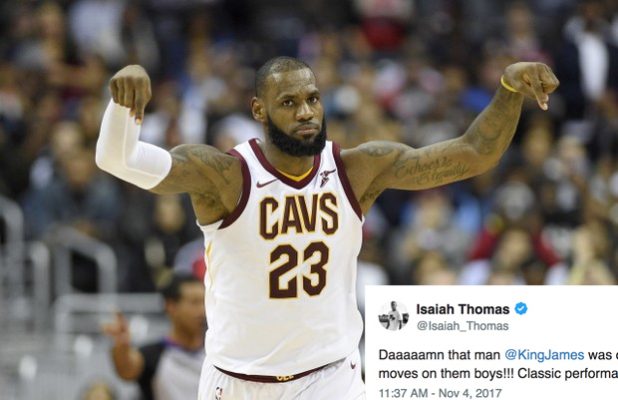 Cleveland Cavaliers superstar LeBron James put on an absolute show on Friday night against the Washington Wizards as he carried the team on his back en route to a 130-122 victory. The four-time MVP tied a franchise record with 57 points on a hyper-efficient 23-of-34 shooting to go along with 11 rebounds, seven assists, three steals, and two blocks.

In addition, James became the youngest player in NBA history to reach 29,000 points and his teammate Isaiah Thomas couldn’t help but react to the mesmerizing performance.

Daaaaamn that man @KingJames was out there doing workout moves on them boys!!! Classic performance fam #RealKilla

The Cavs are patiently awaiting the debut of what is expected to be their starting point guard. Although Thomas won’t be of much help on the defensive end, his offense and three-point shooting in particular would be a big boost to the Cavs offense. The 5-foot-9 guard averaged 28.9 points and 3.2 made 3-pointers per game last season with the Boston Celtics.